[HanCinema's Drama Review] "Heard It Through the Grapevine" Episode 10 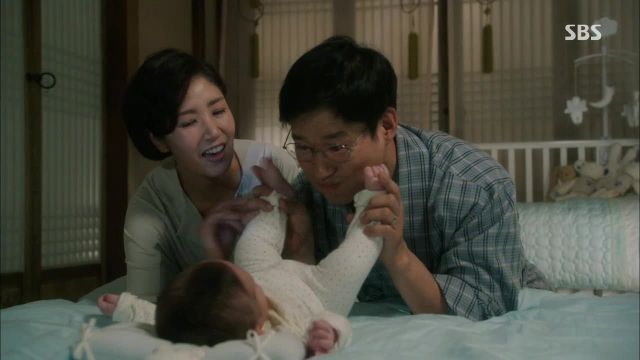 After ten episodes I doubt that "Heard It Through the Grapevine" is going to change much in style. Instead, it continues to play much like a manga adapted for the small screen and the main characters are the comical Jung-ho and Yeon-hee.

The couple has more fits than their infant grandson and the major theme of the episode was denial. They denied that they missed In-sang and Beom, and especially Jin-young when they went to visit the maternal grandparents. Rather than speaking, they pulled social rank and hissy fits and made Jin-young come back on a hastily made up principal. Beom's parents are good foils for them, as relaxed and fluid as Jung-ho and Yeon-hee are rigid. I'd still like to see more individual development on their part, but by this point in the drama I do not expect it.

Yeon-hee's friends have played a decent role thus far, but they are two-dimensional and purely functional characters. One serves as Yeon-hee's enemy, one serves as the peacemaker, one serves as an instigator. They do little besides act to serve the satirical purpose of the drama. I'd love to see them bring up social issues and live through them. Yeon-hee's enemy, Yi Young-ra, has a daughter who is struggling, but the situation isn't developed beyond a few tears and a scolding when the daughter tries to commit suicide. The story should've build up the suicide attempt and focused more on the aftermath. Social pressures on the upper echelon are massive; it would've been a perfect opportunity to explore that.

Jung-ho's employees also play a role in this drama. They are the Greek chorus, as I mentioned in another review, and they are the people who can best undermine the tyrannical Jung-ho and his wife. They would be more effective if they were more developed as they went along slowly undermining Jung-ho's dishonesty at work. But this drama doesn't seem to serve any other purpose save to mock Jung-ho and Yeon-hee.

One strong point of the episode was how sweet Jung-ho and Yeon-hee are with their infant grandson. They are open, unafraid to be silly, and loving. It's the opposite of how they act at all other times. I wish there was more of this earnestness rather than just foolishness. The story could fill out more in that way. Take away some of the comedy and leave the genuine.

"[HanCinema's Drama Review] "Heard It Through the Grapevine" Episode 10"
by HanCinema is licensed under a Creative Commons Attribution-Share Alike 3.0 Unported License.