[HanCinema's Drama Review] "Heard It Through the Grapevine" Episode 15 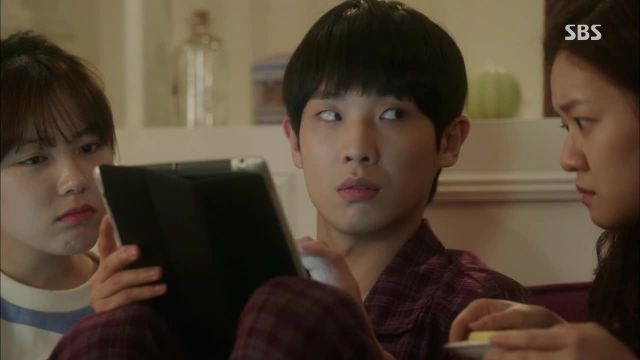 There is a broader goal in "Heard It Through the Grapevine", but it keeps getting lost in the episodic format of the show. The meshing of Beom's world and In-sang's world causes friction and change, which is quite interesting. Unfortunately the show has turned back to Jung-ho and Yeon-hee's childish antics. If they don't get their way they have a temper tantrum.

Not all of the show was about Jung-ho and Yeon-hee's insecurities and obsession with status. Some of it focused on how much Beom likes being accepted by the difficult-to-please Jung-ho and Yeon after the trials they put her through. It's easy to see how the pressure molds her into a different person. I do like that this episode finally showed us her attachment to her family. I want more of that. I want more of what makes her tick and why she chooses to do what she does. It's much more obvious in her sister, Noo-ri, who is trying to ladder climb to keep up with her sister and maintain her family's honor.

The more minor characters like Yeon-hee's friend Young-ra are a waste of screen time. She is supposed to be a woman of the upper class to mock, and instead she's merely cruel and obnoxious. She tempts Jung-ho out of petty revenge, which I suppose could be interesting, but both characters are difficult to emotionally invest in. In other words, I don't care about them or what they do. There is also the staff who still perform the function of informing the viewers about the complex social relationships that Jung-ho and Yeon-hee have with the world. Their personal relationships are also not that interesting.

We saw more out of In-sang who is worried about the pressures his parents are putting on Beom's and about the favors that Secretary Min asks him for. Min is out to show Jung-ho that he is a hypocrite and can't behave that way. She has some sort of vendetta that has remained pretty vague. This show needs direction. Strong direction. It just sits in its own juices and stews and never makes anything of itself.

"[HanCinema's Drama Review] "Heard It Through the Grapevine" Episode 15"
by HanCinema is licensed under a Creative Commons Attribution-Share Alike 3.0 Unported License.