[HanCinema's Drama Review] "Heard It Through the Grapevine" Episode 16 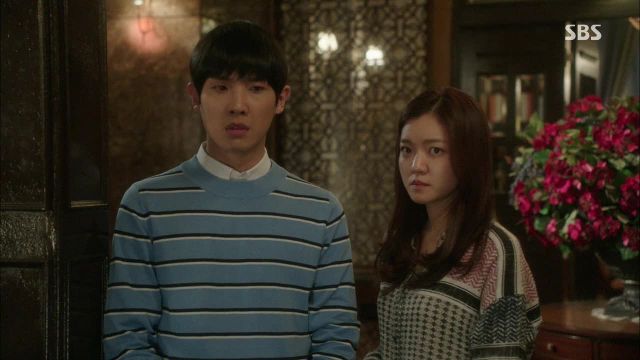 When one conflict loses steam, a new one is introduced to maintain plot tensions. This manner of retaining viewer interest leads to haphazard plot construction and choppy character development.

The newest intrigue surrounds Jung-ho's obsession with Young-ra. He's fallen in love with her, and his staff and wife have caught onto his changed and elusive behavior. Jung-ho's romantic endeavors coincide with the disillusionment of In-sang and Beom - they realize that Jung-ho is not the untouchable, perfect being he pretends to be. He lectures them on correct behavior, and proceeds to cheat on his wife, displaying the hypocritical behavior that is typical of his person. Unfortunately, too much time is spent on Jung-ho's ardent crush on Young-ra. It drags on and consumes air time that could be better used by other characters.

Beom and In-sang are interesting characters who are shoved to the sidelines. Beom has so many issues she is working through that would be wonderful to explore such as how difficult it is for her to emotionally adjust to her new lifestyle. She misses her mother and hates to scold her sister, but we see little beyond meager scenes that give the barest hints of Beom's feelings. In-sang retreats into himself as he realizes his father is very much human. He has blindly followed Jung-ho his entire life. What a wonderful character to explore - and yet he hasn't been explored. Instead we get Jung-ho's rather nauseating love life.

I would have preferred to see the young couple realize that Jung-ho is not quite what he seems because of his dubious law practices, the very same law practices that Secretary Min is trying to uncover with Beom's uncle. It's a side plot that has been poorly executed in that is it confusing and underdeveloped.

Beom's family reaches a stasis in this episode. The temptation of Jung-ho's offers wear off and they return to normal, or as normal as they can be now that their daughter is part of a rich and prestigious home. Their character trajectories have been better handled than that of Beom and In-sang. They've come full circle despite the fact that they haven't had much screen time.

One major complaint I have is regarding the very shaky camera that is used on closeups and over the shoulder shots. It's quite distracting.

I'm hoping for a stronger second half of the drama that doesn't rely on silly ploys to garner interest.

"[HanCinema's Drama Review] "Heard It Through the Grapevine" Episode 16"
by HanCinema is licensed under a Creative Commons Attribution-Share Alike 3.0 Unported License.