[HanCinema's Drama Review] "Heard It Through the Grapevine" Episode 17 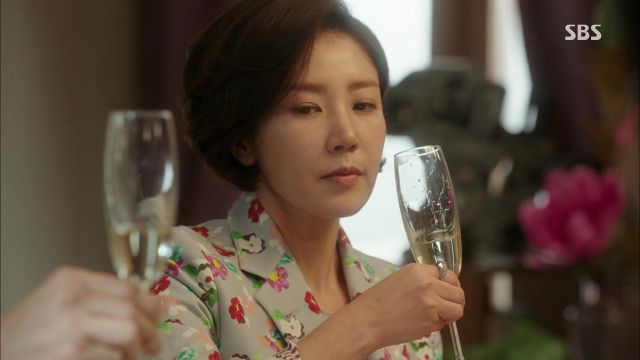 This episode was chock full of the kind of plot material I've been waiting sixteen episodes for. Hypocrisy is exposed and Beom and In-sang finally begin to take measures to rid themselves of the foolishness brought upon them by Jung-ho.

There were a couple of powerful, long awaited moments on the parts of In-sang and Beom. They had been ignorant of the fact that Jung-ho and Yeon-hee were human. Instead, they had looked upon them as figures of absolute power. Beom had been swept up by their grandiose behavior, but her eyes have now been opened to their hypocrisy. Rather than allowing herself to be caught up in the prestige of her new position, she is now back to the clever, shrewd girl who fights for what is right. Now, however, she is more experienced and wiser in the ways of Jung-ho and Yeon-hee. In-sang is growing from an obedient son who never questioned the source of the wealth that funded his privileged life into a curious man who wishes to set his father on a straighter path. There had been signs of the changes in both of them, but only now have they actually been acknowledged and mentioned. That is a major issue with this show: lots of hints of things to come and very little action.

We see this growth in the rest of In-sang's and Beom's generation. Young-ra's daughter is appalled by her mother's flirtations with Jung-ho. Je-hoon and Noo-ri understand the sticky social web the adults have trapped them in and carefully navigate it. While the adults around Jung-ho watch and gossip, it is the younger generation that seems to have a mind to change things. I really like this and wish that the show had gotten to this point sooner.

Yeon-hee is also separating herself from her husband with his newest, and blatant, transgressions with Young-ra. I like to see her standing up to him and also opening up to Beom. We haven't quite seen the change in her thinking that the kids are opening for, but perhaps their future attacks on Jung-ho will spark genuine change in Yeon-hee.

One major complaint of mine is that filming of this show is rather uninspired and boring. The home scenes are always dark and muted in palette. The locations outside the home are uninspired. As a visual medium, television should try to appeal to the eyes, and "Heard It Through the Grapevine" seriously lacks in visual appeal.

Hopefully the change in pace and tone that this episode introduced will continue forward.

"[HanCinema's Drama Review] "Heard It Through the Grapevine" Episode 17"
by HanCinema is licensed under a Creative Commons Attribution-Share Alike 3.0 Unported License.