[HanCinema's Drama Review] "Heard It Through the Grapevine" Episode 19 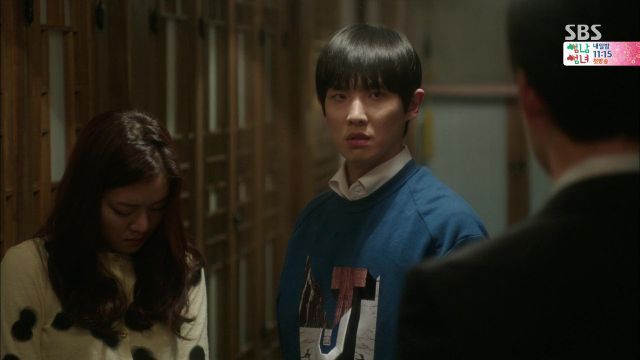 Despite the fact that Jung-ho and Yeon-hee display incredibly childish behavior, the people around them continue to cater to their every whim. It is a result of the fact that they have money and power born of inheritance and enough cunning to maintain it. Against these unfair circumstances do In-sang and Beom find themselves waging war.

Those around them hold unique opinions as to whether or not they should even try to battle the power that be. Beom's parents and sister are terrified for Beom's place in her in-laws household and for her future. The staff spectates with the occasional meddling curiosity. Jung-ho and Yeon-hee are appalled by the blatant affront to their authority and pride. Secretary Min and Beom's uncle are in the unique position to support In-sang's and Beom's cause because they are directly affected by Jung-ho's self-righteous business practices. Currently they stand as the young couple's only allies. Slowly, however, as Beom reconciles with the people she hurt during her jaunt down arrogance lane, she gains supporters who can hopefully help her set In-sang's parents down the right path.

This episode was very clever in that it brought In-sang's parents together to scold the kids on tarnishing their pride, but then it brought Jung-ho's biggest weakness to the fore in the finale: his love Young-ra meets with his angry wife. His relationships are fragile while In-sang's and Beom's are growing strong. These strengthened relationships allow In-sang to discover the loopholes that allow his father to practice shady law and use them against him. This ordeal brutally opens In-sang's eyes to the truths about his family and how he's grown up. He can see how his father' selfishness and sense of entitlement has harmed not only his family, but his friends' families and those around them.

Happily, this episode finally clarified the emotional aspect of Beom's uncle's involvement in Secretary Min's cause: to bring Jung-ho to justice. We know the uncle was hurt, but not truly how he felt about it. Only now, nineteen episodes in, do we get an emotional outburst that allows us to connect to him. This really should have come much sooner. I want to see the same from Secretary Min. I want to feel her emotional connection to her cause.

As for the cinematography I complained about last review, I'm happy to report that there have been a few wonderful improvements. For example, when the kids pit themselves against the Jung-ho, the composition and character placement in a scene truly reflect that. We are given Jung-ho's back, turning him into a faceless power and focus on the two kids who fearfully face that power.

"[HanCinema's Drama Review] "Heard It Through the Grapevine" Episode 19"
by HanCinema is licensed under a Creative Commons Attribution-Share Alike 3.0 Unported License.