[HanCinema's Drama Review] "Heard It Through the Grapevine" Episode 2 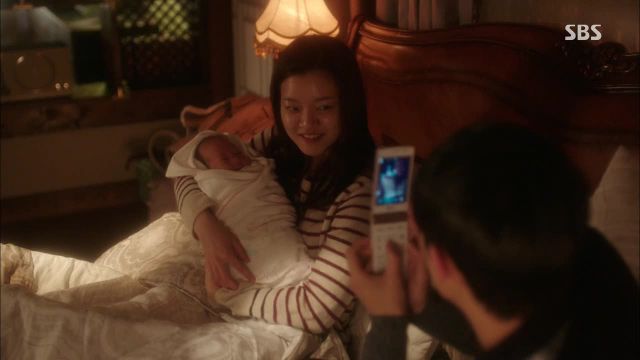 "Heard It Through the Grapevine" has taken the miracle of birth and used it masterfully to achieve multiple ends. It captures the agony of childbirth, the wonder of new life, the tumultuous emotions new parents feel, the social terror In-sang's parents feel, and also manages to capture the irony of the fact that In-sang's parents are unhappy during one of the most wonderful moments of their son's life.

In-sang's parents are rich in wealth and social status, and yet they are unhappy at the birth of their grandson. Beom's parents, on the other hand, cry tears of joy that wash away the terror and doubt they'd felt during her pregnancy. The juxtaposition between the monetarily rich family and the poor family and the fact that their emotional wealth is in direct opposition could have been mishandled, but it wasn't. Jung-ho and Yeon-hee struggle with the blow to their social status and barely keep it together. Their breakdowns are portrayed with a morbid humor that enhances the satire of the rich and powerful, and the terror they suffer in order to stay rich and powerful.

Jung-ho and Yeon-hee are wonderful tools of satire. They are the production team's tools. As they suffer, humorous music plays to show that the immense social pressure they put on themselves is utterly ridiculous. Their behavior is worse than that of high school children who lie and cheat to protect their pride and honor, but the way that Yu Jun-sang and Yoo Ho-jung portray them with the utmost seriousness makes the two characters more hysterical than horrific.

As a musician, I must mention the music choice. The klezmer music that plays during Yeon-hee's panic attack and mocks her. The thinly textured string music that hauntingly accompanies In-sang and Beom on their first entrance into his parents' house as a couple and foreshadows a rocky future. This drama keeps surprising me with how cleverly is puts together its elements to both give the show lots of heart and lots of punch. It really needs it in order to follow "Punch - Drama", the powerful, gripping thriller that preceded it.

This episode focused solely on the birth of In-sang and Beom's child and it managed to take a sliver of time in the characters' lives and pack it full of emotional turmoil, social commentary, and relations fraught with tension. Lee Joon remains a standout performance as the jittery, stuttering, cowardly new father who has a tender heart and the will to be a good parent. He brings so much life to In-sang. Opposite him, Go Ah-sung keeps Beom a cool-headed woman. She is no damsel in-distress, but neither does she have an endlessly hopeful attitude. She's a realist and also a strong woman. She stands up to In-sang's controlling parents in a way that had me fist-pumping and rooting for her.

"[HanCinema's Drama Review] "Heard It Through the Grapevine" Episode 2"
by HanCinema is licensed under a Creative Commons Attribution-Share Alike 3.0 Unported License.