[HanCinema's Drama Review] "Heard It Through the Grapevine" Episode 22 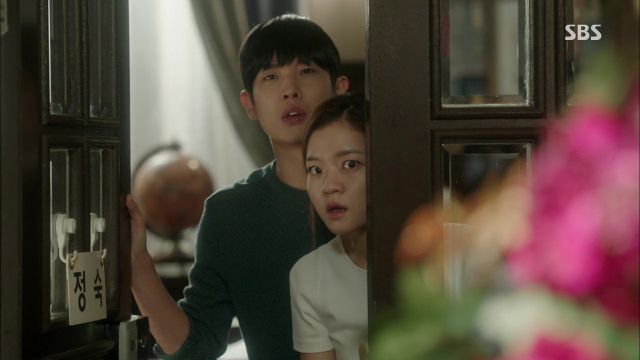 This is the episode of the underpaid and overworked hired help. Until recent episodes they have mostly made commentary on Jung-ho's and Yeon-hee's lives and decisions. Now they finally stand up for their rights as human beings and it throws the rich folk into a tizzy. Unfortunately that tizzy gets taken out on Beom.

The new pressure on Beom allow her to prove her mettle. Her family is divided on how to proceed with the lawsuit against Hansong's major client because it goes directly against the powerful Jung-ho. Not only is he the head of Hansong, but he is the head of the household Beom married into. However, the lawsuit could allow for major changes to be made. The tensions in Beom's family and at Jung-ho's workplace are well-organized and are unfolding at a good clip. I find myself wishing the pacing had been this stellar earlier on.

Also, the camera storytelling is improving greatly. The composition of shots and scenes is much better thought out. The more Jung-ho thinks of himself as untouchable, the more we see him, quite literally, as merely a head in the shot. In the background Yeon-hee often sits, also with her back to the camera, a faceless source of abused power. The rebelling staff crowds shots and overwhelms the screen as much as they overwhelm Yeon-hee and Jung-ho.

The staff's rebellion is not only a breath of fresh air for the camera, but also for the storylines. Finally they become people rather than a group commentary. they are overworked, underpaid, and underappreciated. Previous the show had tried to make the staff relatable, but it hadn't quite worked until now. Perhaps because they now show more emotion. In any case, Beom, In-sang, and I-ji back the staff, but Beom takes the brunt of the anger as the outsider. She does so bravely. Her situation, however, causes the staff and her family serious distress. It's a very difficult thing for her to live in such a tense home. What I love about her character is that she regained her verve and stands up for what's right.

As much as I wonder how Jung-ho and Yeon-hee will retaliate, I also wonder how those working to right the wrongs of Hansong will go about doing so. With the family troubles at home there very well may be a chance to affect change.

"[HanCinema's Drama Review] "Heard It Through the Grapevine" Episode 22"
by HanCinema is licensed under a Creative Commons Attribution-Share Alike 3.0 Unported License.