[HanCinema's Drama Review] "Heard It Through the Grapevine" Episode 23 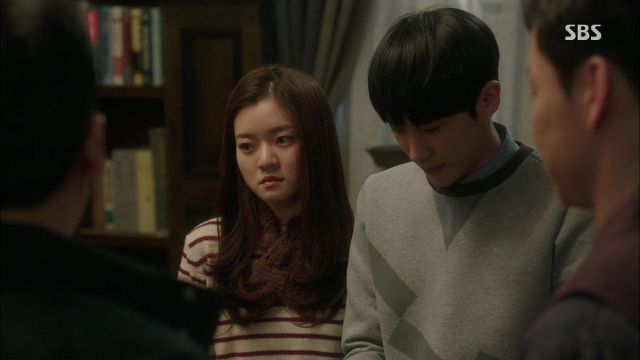 "Heard It Through the Grapevine" has created a world where a prison needs no bars, it merely needs terrifyingly strict social barriers. Those barriers can even prevent mothers from running to their children's aid. This has been true for most of this show's run, but never has it been as nearly insurmountable as the present.

The world that Jung-ho and Yeon-hee live in is one that his family established and raised him in. Yeon-hee was drawn into it by marriage and neither have managed to break free of the poisonous rigours of social etiquette. Now marriage has drawn a highly unprepared Seo Beom into its rigid structure that was more difficult to navigate than she had anticipated. As she falters, so do the staff and her husband who depend on her strength and cunning intelligence. What makes Beom's journey so interesting is that she is so capable. She is a heroine one can cheer for on paper and on screen. What lacks however, is that Go Ah-sung, while a capable actress, falls short when she has to appear vulnerable. Her strength of presence is engaging, but cannot seem to make herself small when her character is broken down by circumstance. It is something that her counterpart, Lee Joon, does exceptionally well.

With the severe circumstances the young couple find themselves in, the story could do much more in its explanation of how Jung-ho's interpretation of Korean tradition can trap the younger generations with its rigidity. The implementation of satirical elements needs to be clearer. Right now there is little clarity and a lot of verbal and emotional thrashing. For the satire to work, I want to see  how the chaebol lifestyle hurts Beom, but also hurts Jung-ho. The humor can help, however, I don't see Jung-ho learning, or feeling confusion, or growing. The same is true for Yeon-hee. In contrast, In-sang and Beom go through worlds of change that should be mirrored in In-sang's parents.

The storyline that involves the staff is intriguing because the corruption that fuels Jung-ho mirrors itself with Secretary Yang and Secretary Lee. They are just as greedy - they just don't have as much power as Jung-ho and his wife. I like the exploration of greed, money and power, but I don't feel a cohesiveness within the show between the upper echelon and those that serve it. Where the connection is most felt is between Beom, In-sang, and Beom's family. The social barriers enforced by Jung-ho split them apart and create such a poignant emotional dilemma that isn't fully realized. That's just a writing flaw. At this point in time this won't correct itself. Hopefully the direction, rather than the depth, of the story will carry the drama through.

"[HanCinema's Drama Review] "Heard It Through the Grapevine" Episode 23"
by HanCinema is licensed under a Creative Commons Attribution-Share Alike 3.0 Unported License.