[HanCinema's Drama Review] "Heard It Through the Grapevine" Episode 26 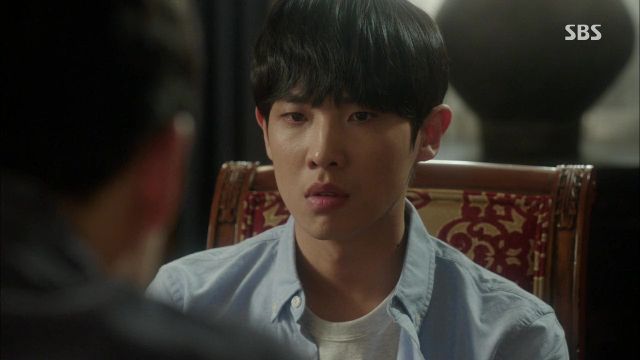 The inability to adapt and change has cost Jung-ho what he needs most: people. One by one they leave him because of his severe superiority complex. What is sad is not that Jung-ho acutely feels the loss of his people, but that he feels offended by what he views as their desertion.

Jung-ho's arrogance stands out in relief against a backdrop of disgruntled employees and family members. Although Yeon-hee is a foolish, selfish woman, she doesn't have the cruel streak that Jung-ho does nor does she truly understand how deeply corrupted her husband is. She is trapped in her world of self-entitlement. In-sang is, in some ways, much the same. He sees his father does wrong, but it hasn't truly penetrated the lifelong brainwashing that Jung-ho has subjected him to. The strength in In-sang's character is that despite the fact that his realizations come slowly, they do come and they make steady progress. He can see how his family has negatively affected Beom. He also misses her terribly and that emotion eats away at him. He has been notably weak throughout the drama and now he has to find it within himself to instigate change.Finally, we get development in him and we only have four episodes left. It's a waste. it's also a waste of Lee Joon who has finally come alive with some interesting plot material to work with.

The same holds true for Beom. We see the stress break down Beom's sanity and it's a development that would've been best seen earlier, not at the drama's denouement. She is hypersensitive to all of the past wrongs Jung-ho has committed against her and to all the ones he keeps committing. This is her true test of character because it is when she is at her weakest when she will best prove her mettle.

Then there is the banding together of the staff and employees of Jung-ho's household and company. They leave Jung-ho one-by-one. He doesn't understand why, but they come together to bring down the man who treats them like subhuman because they do not have his vast wealth or power.

Now to see what plan Jung-ho concocts to win back his kingdom and what plan In-sang will counter it with, if he can find the courage.

"[HanCinema's Drama Review] "Heard It Through the Grapevine" Episode 26"
by HanCinema is licensed under a Creative Commons Attribution-Share Alike 3.0 Unported License.