[HanCinema's Drama Review] "Heard It Through the Grapevine" Episode 27 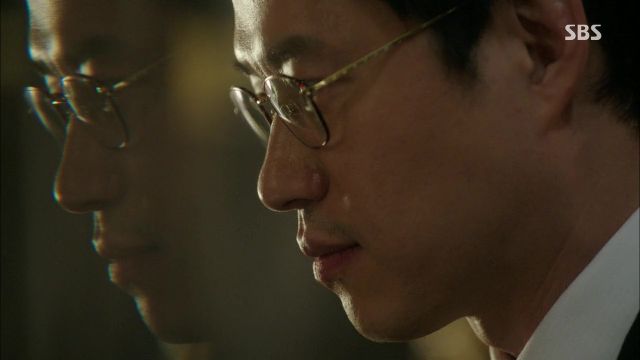 This show is gearing towards the ending. It spirals inwards on itself, making the same plot moves over and over again. Jung-ho is selfish and hurts everyone around him. In-sang has several battles raging within him: his loyalty to his family, his greed over his inheritance, and his love for Beom. Beom is struggling with her pride and battling Jung-ho's incredible arrogance and power.

That said, the curtain lifts a bit on Jung-ho's backdoor dealings and how he has maintained his wealth. There have been hints at nefarious dealings, but since his family improprieties have affected his social and political standing, we now see that his wealth isn't as stable as he pretends it is. As I've said consistently in the past few reviews, this drama needed to have conflict like this much sooner; it needed to reveal the underbellies of its characters much sooner. It needed a good emotional connection that is made by being vulnerable, not cerebral. It has tackled wealth, power, arrogance, and chaebol culture in a pundit-like manner rather than creating characters we care about in a world we feel drawn into.

On occasion the young lovers are compelling, especially when In-sang has difficulty fighting his desire for some of his father's wealth as well as his overwhelming love for Beom and Jin-young. Or when Beom fights her feeling for In-sang in order to uphold her beliefs in what is right and what is wrong. Watching the gruesome effects of Jung-ho's behavior is powerful material while watching Jung-ho posture and preen like a peacock became stale after ten episodes. If he is not going to learn the error of his ways, he will probably be alienated by those around him. In that case, I'd prefer to see more of what we got this episode: the nitty gritty of how Jung-ho makes his money by cheating others and how he fooled his family into believing he really is high and mighty. This episode put him in the hot seat and that was fun to watch.

As for Yeon-hee, she doesn't seem to be improving much. Perhaps she will be alienated as well, but her character has stagnated and shows no signs of improvement. She was even scolded by a teenager to no effect besides the fact that it was satisfying and amusing.

In-sang and Beom, on the other hand, are full of interest and growth of the painful variety. In-sang cannot balance his want of financial security and with the fact that the money's source will cost him Beom. Beom is struggling with her estrangement from In-sang and her need to triumph over Jung-ho, even in the smallest of ways. It's such a juicy character conflict that I mourn for the sad, stale state of her character prior to this development.

This whole episode is a case of too little too late. Secretary Min finally cracks and shows a little emotion - too little too late. She has been too difficult to relate to for too long. Let's hope we still get these tidbits from now until the finale, it will bring some interest to the drama's end.

"[HanCinema's Drama Review] "Heard It Through the Grapevine" Episode 27"
by HanCinema is licensed under a Creative Commons Attribution-Share Alike 3.0 Unported License.