[HanCinema's Drama Review] "Heard It Through the Grapevine" Episode 28 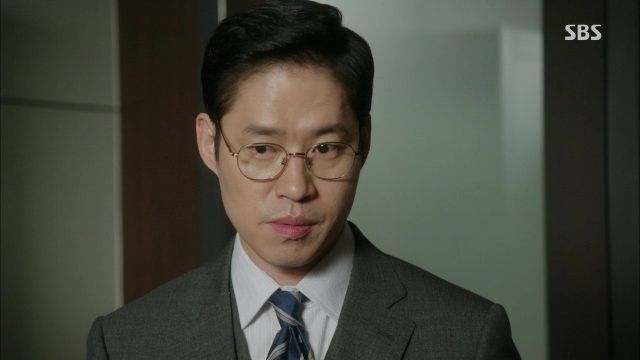 Despite the unhappiness at home, Jung-ho continues to play in the political arena using money to buy him power and influence. In his selfish venture for more power, he doesn't that his son has been agonizing over which path he should take: staying in luxury and abiding by his father's law, or living with Beom and Jin-young and working hard to make ends meet. The decisions both men make also legally affect the other characters in the show, but that aspect of the drama is the dullest.

Jung-ho plans to overwhelm Beom, Secretary Min, and the rest of the staff with insidiously clever legal proceedings and doesn't think about how his children, especially In-sang, view him or his actions. It becomes difficult for In-sang to watch his father, especially when in the midst of deciding how important living in money is to him and the happiness he wishes to have that would require him to live without it. This type of angst is such wonderful character stuffs. It highlights the differences between Jung-ho and his son and makes better commentary on Jung-ho's privileged mentality than any of the comedy in the first half of the drama ever did.

In-sang did not realize how dependent he was on his indulgent lifestyle until the past couple of episodes. Watching the realization dawn on him has been wonderful, especially Lee Joon's nuanced performance. He keenly feels the lack of family without Beom, his child, and his loving in-laws. Although it is satisfying to watch him pick family and love over money, it is the process of making the decision that makes this episode juicy. Compared to his growth, his father's stagnation is highlighted in relief.

Beom and her family struggle to come to terms with how much they've been manipulated by Jung-ho. I think even Yeon-hee is beginning to see how following her husband's every whim has only caused them pain. After In-sang leaves the home, everyone feels empty. The other desertions have only angered Jung-ho. It is only when his son leaves that he keenly feels the loss. Whether or not he learns from this remains to be seen, but he is most definitely affected by it.

The most poignant contrast in the drama is how happy In-sang, Beom, and her family are when they are together. They smile, laugh, fight, and love together in a home while Jung-ho's house is as cold as a museum. Status is more important than familial warmth in Jung-ho's house.

"[HanCinema's Drama Review] "Heard It Through the Grapevine" Episode 28"
by HanCinema is licensed under a Creative Commons Attribution-Share Alike 3.0 Unported License.