[HanCinema's Drama Review] "Heard It Through the Grapevine" Episode 3 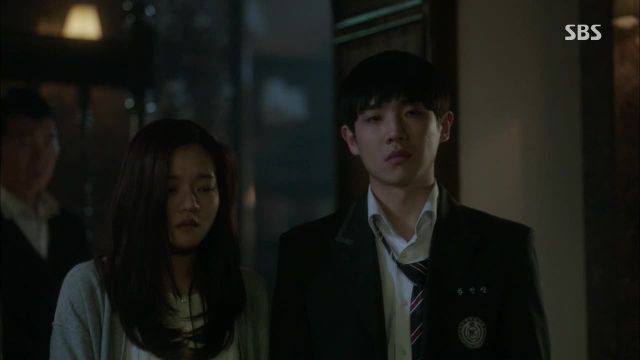 What "Heard It Through the Grapevine" does well is slice-of-life storytelling without becoming too trite. If the show continues this path of development, it will be difficult to make any larger changes without a tonal shift. For now, though, it's quite a wonderful way to exploit the satirical elements that have been soundly nestled throughout the show.

In-sang's parents, Joon-ho and Yeon-hee, are the victims of this drama's satirical elements. While wise in the arenas of money and social status, they are utter fools when it comes to children and family. While unnecessary, the campy music that sounds each time a parent is going through emotional shock due to their social conceptions or emotional immaturity only adds to the humor of the moment. For example, when Yeon-hee is surprised when the baby cries all night, or when Beom actually wants to breastfeed her newborn. Or Joon-ho, who seems to rule with an iron fist, who cannot reign in his cowardly son when In-sang is fired up with the power of youthful love and fatherhood. Yu Jun-sang and Yoo Ho-jung are wonderful as they very seriously plan characters who are so clearly mocked by context.

Lee Joon is delightful in a role that is quite different from his strong, manly, and sometimes terrifying previous roles. He's a coward - a very, very passionate coward. He loves his new family of Beom and their newborn Jinyoung, but he's scared to go against his family. He stutters and throws himself rather awkwardly on Beom when he cannot contain his urge to kiss her. It's both romantic and funny. The focus on the young romance and it's awkwardness despite their new parenthood is a wonderful contrast to his parents' stodgy and planned relationship.

Beom is a wonderful straightman to the madness of In-sang's funnymen family. She is earnest and pure of intention: she wants to care for her child and make a family - not be trapped by society-fearing in-laws. She hasn't been quite as developed as the awkward In-sang, but we have much more time for that.

A few quibbles I have with the show are filming style and lighting. It is dark and hard to see the composition of shots because of the horrid lighting. Or, the sun shines brightly and completely backlights characters, giving them halos and drowning out their faces. Also, the composition of shots is awkward. When trying to include a reclined infant in the shot, the faces of Beom and In-sang are cut out and we only see the crown of the infant's head. Or there will be the bar of a chair or railing in the middle of the shot rather than helping to frame a shot. Despite this, the show is still delightful in these early stages.

The conception of the young romance between Beom and In-sang is lovely: passionate and tender. It centers around their newborn. It's more healthy and clear than the twisted notions of In-sang's parents.

"[HanCinema's Drama Review] "Heard It Through the Grapevine" Episode 3"
by HanCinema is licensed under a Creative Commons Attribution-Share Alike 3.0 Unported License.