[HanCinema's Drama Review] "Heard It Through the Grapevine" Episode 30 (final) 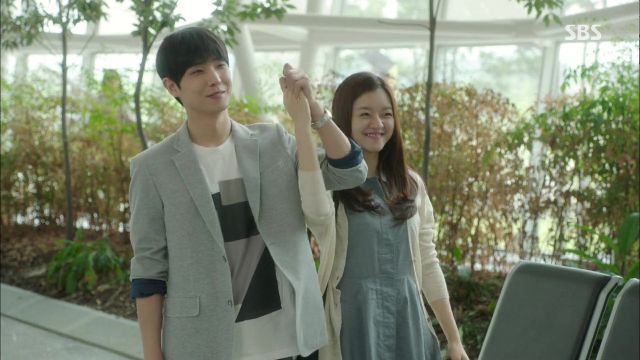 The power of family and true fidelity bring "Heard It Through the Grapevine" to a close. The drama made plenty of social commentary and gave Jung-ho his just desserts by having everyone leave him. This highlights the show's biggest point: equality among people despite socio-economic differences.

The final episode itself was anticlimactic and had a few too many bow-tied plot threads, but it was effective for its purpose. Those who believed themselves to be superior ended up with no one to come home to. Those who treated others well gained family. It is the sheer number of happy people in the end that makes it unrealistic, but the message is pure and good. Beom and In-sang influenced others with their solid relationship and with the fact that they overcame social class to be together. Because of their example, the staff quitted Jung-ho's employ and moved on in order to do work where they felt appreciated and fulfilled. Had the show invested more in the staff members as individuals their stories and triumphs would've had more impact, but the ending interactions were nevertheless fulfilling.

Secretary Min and Secretary Yang were foil characters, one who did whatever it took to attain justice, one who did whatever it took to satisfy her desires. They were both caricatures of good and bad and each received their just desserts based upon their actions, like Jung-ho did. One of the show's biggest issues were that the characters ended up merely becoming caricatures rather than fleshed out people who viewers could relate to. Yeon-hee is a prime example of this. She was a trophy wife who carried out the duties of her station and nothing more. Her friends were a reflection of her, products of their indulgent lifestyles and more worried about the impressions their family's portrayed than the fact that their children chose to act with integrity. Neither were Yeon-hee's friends actual friends to her in the truest sense of the word. They merely got together because convention said it should be so. Support and good humor were never found among them.

The finale itself focused on not only In-sang escaping Jung-ho's shadow, but everyone else doing so as well. In-sang decided to make his own path and as he did so the writer threw in some last bits of social commentary: the government doesn't well support the impoverished and help shape them into helpful citizens. Whether or not this is true is an argument in and of itself, but the comment was nevertheless made.

One of the best points of this final episode was that, for Jung-ho, it ended just as it began: with Jung-ho swinging around his antique sword in anger, much like an infant. What that highlighted, however, was that teenage parenthood was a subject forgotten in the earlier episodes . it should've been a point that continued, especially since that is a social contention in societies all over the world. Many points like that were picked up and dropped, seemingly at random. This was a plot-driven drama, but the plot was often shaky. It rarely struck a good balance between the humor and the social commentary. Not to say that there weren't some fantastic moments, but those were actually found in excellent character beats. For example, when In-sang agonized over following in his father's footsteps or taking a new path with Beom. Or when Secretary Min finally broke down and cried.

I've said this before, but "Heard It Through the Grapevine" was too cerebral for its own good. It needed more heart. That said, it wasn't a terrible drama. To watch as a Korean drama fan who is watching for pleasure and not for analysis, this show could be entertaining. That said, it wouldn't be worth more than a single watch through.

"[HanCinema's Drama Review] "Heard It Through the Grapevine" Episode 30 (final)"
by HanCinema is licensed under a Creative Commons Attribution-Share Alike 3.0 Unported License.