[HanCinema's Drama Review] "Heard It Through the Grapevine" Episode 6 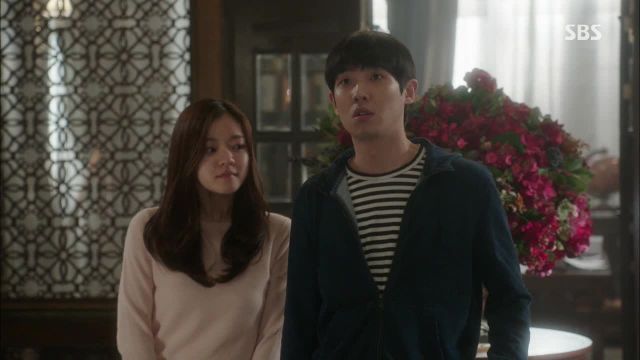 "Heard It Through the Grapevine" seems to be, on the surface, a story about young love, teenage pregnancy, normal troubles with in-laws and socio-economic differences. In reality, it is about Jung-ho and Yeon-hee, the infantile, yet incredibly wealthy and socially influential parents of In-sang. It is about their inability to adjust to situations outside the status quo.

The couple treats In-sang and his new wife, Beom, like dolls playing at being a family. It's all part of the drama's attempt to empahsize the satirical elements, which for the most part provides loads of entertainment. Yeon-hee is petrified of confronting Beom's mother and hyperventilates over the smallest of provocations. Jung-ho preaches about equality amongst people, and in the privacy of his own home coaches his wife on how to deal with common folk. The hypocrisy of the way they live is what makes them fun to watch and to mock from the comfort of my sofa.

On the other hand, while Jung-ho and Yeon-he are well-developed characters, all the others remain more or less unchanged. In-sang's gumption has increased as he stands up for his new family against his near-tyrannical father, but he is still just a tool to highlight the ridiculousness of his parents' antics. Beom has devovled into a meek, parent-pleasing girl. While this isn't surprising, every new bride wants to please the in-laws, but I miss the verve she once had. If the writers use this has a tool to build her character, great. But right now it feels like a loss.

The juxtaposition of the parents of both In-sang and Beom is probably the strongest element of the episode. Both sets of parents love their grandson and coo over him, whether in picture form or over the real baby. Both sets worry for the future of their newly wedded children. But In-sang's parents make fools of themselves while Beom's parents proceed in what could only be called a normal rate of development. They worry over the relationship with the in-laws, over how much is too much to ask, over how happy their daughter is living with them. It highlights how far Jung-ho and Yeon-hee need to go in order to grow up and act like real parents.

They are a hypocritical couple, Jung-ho and Yeon-hee. They order the children to stay away from the baby and keep proper manners in mine at all time. Yet, Jung-ho sneaks into the baby's room at night to see him. They display the very behavior they speak against. Hopeful the parallels in Jung-ho's and In-sang's behavior will make Jung-ho realize that what he's doing is wrong  separating parents from newborn isn't right.

I'm still hoping for this drama to open up in scope. It's very much like a sitcom now in location and storyline. I want to see it expand more. It has the time to do so.

"[HanCinema's Drama Review] "Heard It Through the Grapevine" Episode 6"
by HanCinema is licensed under a Creative Commons Attribution-Share Alike 3.0 Unported License.