[HanCinema's Drama Review] "Heard It Through the Grapevine" Episode 7 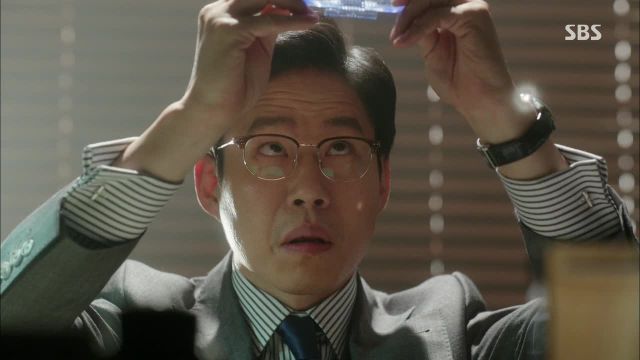 Jung-ho and Yeon-hee become more ridiculous in this episode. They are the center of the show with their immaturity and, dare I say, idiocy. This episode displays that their manicured appearance most definitely belies the children beneath.

As of late, Jung-ho has become obsessed with losing hair. It is a running gag. Each time something goes wrong, it usually affects Jung-ho's perception of his hair loss. He can be manipulating a politician and the subsequent scene will then focus on Jung-ho's hair. The juxtaposition of  the ridiculousness of Jung-ho's vanity and his competency as a cutthroat lawyer is particularly effective.

A character "Heard It Through the Grapevine" tries to develop is Beom. She's been plot fodder up until now. The show has given her intelligence and an opinion, but it is only used to instigate Jung-ho's and Yeon-hee's idiocy. It's sad that Beom isn't developed beyond this. I'm a bit frustrated by her stunted growth. She was so vivacious at the beginning before she gave birth to Jin-young. I also like In-sang better. He was more entertaining, and frankly, more interesting when he was cowardly. The fact that he now stands up to his parents seems contrived, as though the writer just wants to instigate his parents rather than make him grow. Both he and Beom need to enact change, not just act as foils for In-sang's parents.

The same is true for Beom's parents. They are a cast of savory characters who aren't given a chance to break out of the stereotypical poor family mold. Every once and a while the mother gets to show support for Beom that is unusual for a K-drama parent, but other than that, she's kept in a box.

Hopefully within the next few episodes the story will begin to expand.

"[HanCinema's Drama Review] "Heard It Through the Grapevine" Episode 7"
by HanCinema is licensed under a Creative Commons Attribution-Share Alike 3.0 Unported License.