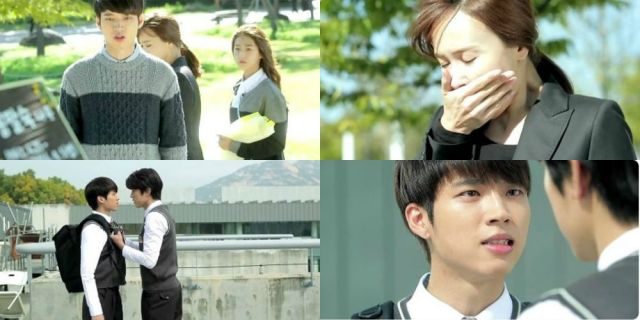 This episode initially focuses on Woo-hyeon's pride. He hasn't taken the discovery of his mother well. To be a little more specific, Woo-hyeon is actively refusing to acknowledge Ji-hye or the help she can give him because in Woo-hyeon's estimation, him and his grandmother have been slaving away to make ends meet on their own this entire time, and Ji-hye didn't even bother to show up for the funeral. His estimation is unfair and doesn't take into account the whole picture, but why should he?

While little progress is made in smoothing over Woo-hyeon's anger issues it's pretty clear that the relationship with his mother will have to be salvaged somehow in order for this drama to end. Seul-bi, as helpful as she tries to be, simply isn't any substitute for an actual fully functional adult. And even to this end she has her limits in reigning in Woo-hyeon. He almost refuses a second badly needed injection of money out of pride until friends force him to reconsider.

That leads into the next major conflict, which to be honest is a little awkward. I could have sworn it was just a couple of episodes ago that Joo-ah was irreversibly on the opposite end of the bullying table but I guess that was mostly resolved somehow? The bullying issues aren't completely gone. It's still a little weird for the drama to transition without giving a full resolution and explanation. I guess high school students are fickle like that.

Anyway, the next major issue is the fact that Woo-hyeon and Seul-bi are living alone, together, and are teenagers. On a meta level I found it pretty funny that this has never come up before- raging teen hormones is such an omnipresent stereotype that the chaste nature of Woo-hyeon and Seul-bi's relationship almost comes off as quaint. Almost because, surprise surprise, not all teenagers are raging sex machines. They are, in fact, capable of restraining themselves.

And this is probably the most essential situation for that, too. With all the problems Woo-hyeon is already dealing with on a regular basis, the last thing he needs right now is the ensuing drama of a sexual relationship. Also that would kind of take "High School - Love On" in an icky direction I'd just as soon avoid. One of the major positives of the drama is the way storyline conflicts come up thoughtfully and organically. Woo-hyeon and Seul-bi just aren't those kinds of teenagers- however much the rumor mill states otherwise.