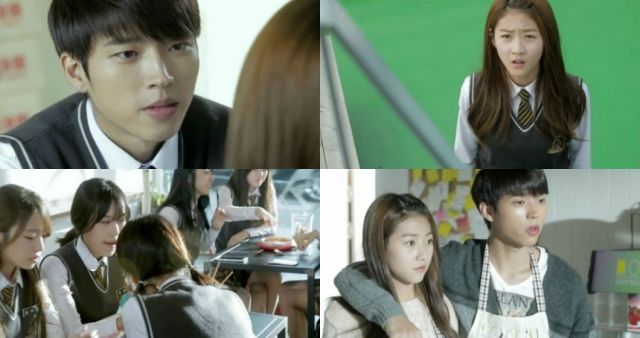 There's been relatively little actual storyline movement in "High School - Love On" lately. I've had difficulty remembering the actual important plot events in recent episodes and this one too is pretty limited in scope. Seul-bi moves out of Woo-hyeon's home- really probably the right decision, all things considered. And that's really all that happens. All the rest of the conflict is derived almost entirely from the tension between Woo-hyeon and Seong-yeol over Seul-bi's ultimate fate.

I know that a certain amount of teen romance is to be expected from a drama with a title like "High School - Love On" but it does get to be tiring after a certain point. Honestly, what I was really hoping for here was more interaction between Seul-bi and Ji-hye. Seul-bi hasn't actually had much experience in dealing with adults, and a nice chat with a couple of surrogate parent figures here could have gone a long way to giving her a better idea of what it's like to actually be a human for the long term.

But instead we're left with a lot of tense teen drama events that mostly just retread earlier material. Woo-hyeon is still looking for excuses to fight people, and as usual, Seul-bi is the one that has to get him to calm down and realize he's in no position to be making enemies. In the short term, though, there doesn't seem to be that much to worry about. After Seul-bi leaves Woo-hyeon gets embroiled in a minor storyline with his bros, leaving us with not a whole lot to feel tense about short term.

Teen romance is nice and all, but "High School - Love On" would do well to realize that the main source of tension right now is Woo-hyeon's future. The restaurant is in debt and he's refusing any kind of charity from the one person who can really help him. It's kind of frustrating that it's only now that Ji-hye has become relevant to the plot that the drama's decided to stop giving her any scenes.

The overall material is strong, even if the humor's a little off this time. I'd be inclined to write this off as a mildly good episode except that I'm starting to get a little impatient. Now that Seul-bi's out of any immediate danger in regards to the bullying, it's difficult to worry about her all that much, so the fighting between Woo-hyeon and Seong-hyeon comes off more as recycled teen bravado than anything all that interesting. Still, as long as the characters remain appealling and the plot doesn't go completely bonkers, "High School - Love On" will probably still be worth watching.