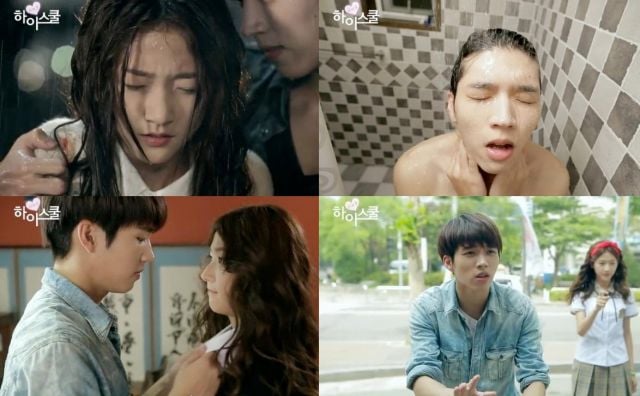 Seong-yeol (played by Lee Sung-yeol ...again, original) is actually not that bad a person. This episode makes it very clear that while he's undergoing typical adolescent mood swings and rebelling against his parents while trying to go it on his own, Seong-yeol does have some clear moral standards. Or at the very least, he's conscious that he should have moral standards, and won't just remain in the same situation indefinitely doing nothing.

Seul-gi does have her moments here, mainly in adorable repartee with Woo-hyeon and also the struggle against a rather inept purse snatcher. For the most part, though, her story is put on hold here, even as an observer, while we get a better look at the kind of social world which makes up the high school. Even though Seul-gi isn't much of a presence over the course of this episode, it's easy to wonder how she would have reacted to the situations that Woo-hyeon and Seong-yeol get involved in.

It's also hard to imagine that good outcomes could have been achieved. Woo-hyeon makes mild efforts at interference with the bullying dynamic while Seong-yeol only does so as a last resort. In both cases, though, they've clearly made enemies and only have each other to rely on as possible allies. This isn't really an admirable team-up, as both of the members mostly just want to be left alone to achieve their own goals. But bullies don't rest.

Nor do teachers, for that matter. "High School - Love On" establishes that the teachers themselves aren't terribly reliable as regards this whole bullying prevention thing. Even when they mean well, discipline is meted out clearly on the basis of strict rules. The cliffhanger will probably fall on the same lines. This is literally a situation where a person could die, yet somehow, I doubt anyone's going to receive any kind of censure for it. Except possibly the victim.

As a whole the story arc is easily reminiscent of the plot of "Mourning Grave"- a recent horror movie that also touches on similar grounds. Except that "High School - Love On" isn't a scary movie, but a romantic TV comedy. There is at least the supernatural element of Seul-gi to fall into place. I still have some questions about the first episode actually- like how Woo-hyeon knew a suicide attempt was in progress, and why that storm appeared and disappeared out of nowhere. There's probably more going on with Seul-gi's apparent banishment than it may currently seem.