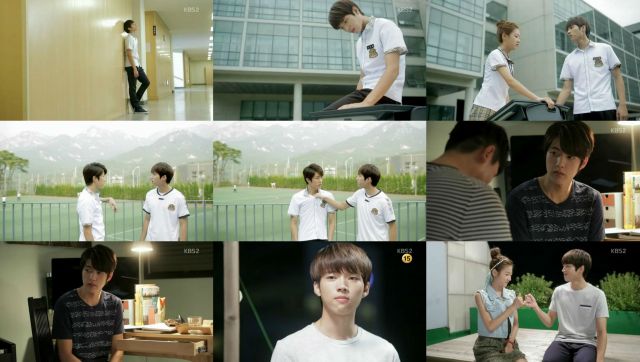 The drama takes an immediate dark turn toward serious bullying issues here. This isn't the casual poorly planned impulsive stuff "High School - Love On" has taken on so far. There's an actual deliberate, maliciously detailed plan here to tear Seul-bi down. And the worst of it is that there's one huge glaring flaw in the entire enterprise. Assuming Seul-bi stole the cell phone, why would she willingly take it out of her backpack for the entire class to see?

In a mystery this would be the first clue for any halfway competent detective that something's not quite right. But "High School - Love On" isn't a mystery- for the moment, at least, it's exploring bullying issues. And this episode gets to "King of Pigs" levels of general enmity to school culture at large. We already knew that the lead gang of named characters were jerks. It's another very disquieting realization to find that literally every single character in the school can be persuaded to go to a very dark, vicious place as long as there's a decent enough excuse for it.

Ironically Seul-bi herself isn't even that bothered that much by anything that happens. She's not human and, as this episode notes, has the ability to return to being an angel without having to deal with any of these problems. That gives the entire storyline here an otherworldly feel that's pretty harsh on us as human beings. Seul-bi may not be an angel in the sense that she defines perfect transcendent holiness and morality, but at the same time she's close enough that her persecution comes off as especially cold.

The sense of black-and-white morality is especially bad. All too many works of fiction present characters in very arbitrary terms- there aren't good and bad actions, just good and bad people, and anything bad that happens to bad people is perfectly justifed in karmic terms. It's an attitude that's horribly messed up, yet quite appealing in its simplicity. It's easy to see why the teenagers have internalized it so deeply. And so to counter this kind of thinking we-

Well, actually, there really isn't a good answer. The plot point is resolved in an unsatisfactory way, but that's all very deliberate. This is an inherently unsatisfying situation, where the only possible defense is just be on constant paranoid guard at all times. These aren't the fun adventures Seul-bi wants to have in the human world, making the drama's overall conflict of Seul-bi's odd position between the divine and human dimensions a surprisingly compelling one. While I'm sure we'll get funny episodes again at some point, the tone here will likely continue to linger in the background for some time.