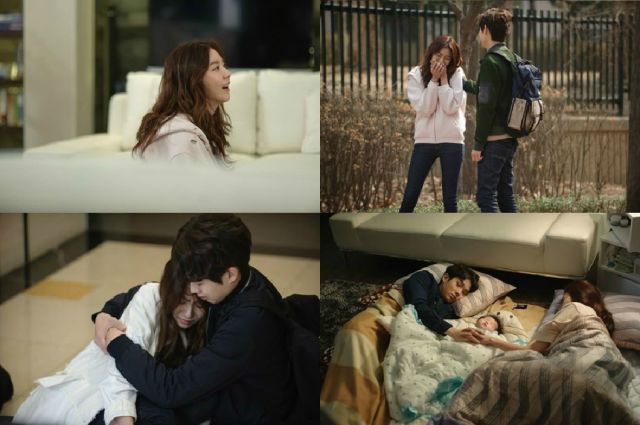 Apparently Do-hee has always had a problem with refusing to clarify misunderstandings for no good reason. While this is still a terribly annoying character trait, "Hogu's Love" does get credit here for finally treating it as a bad thing. The emotional climax of this episode features Hogu giving Do-hee a serious piece of his mind. And while Hogu does inevitably feel bad for being such a jerk, Do-hee really did need the wake-up call. Saying "you didn't ask" isn't an acceptable justification when Do-hee responds to most questions with either misleading obfuscations or indignant bullying (usually it's both).

The comedy, thank goodness, has been momentarily separated from the central conflict. The wacky comedic hijinx in "Hogu's Love" are a lot more bearable when the drama isn't constantly reminding me that its characters are adults making serious adult decisions with major consequences on other people's lives. Friends eating fish snacks? Good. Do-hee trying to act unnaturally cute? Good. High school purity candy? Uh...I kind of doubt that even happens, or at least that it happens that specific way. But at least the comedy is sound.

The segregation also extends to Kang-cheol's gay subplot- aside from the opening portion the drama stops expecting us to laugh at Kang-cheol's dilemma. And it really is a tonal thing- Kang-cheol is genuinely scared for very good reason. And Ho-kyeong manages some mild character development realizing that, hey, she's really kind of being a jerk for shutting Kang-cheol out like this having spent almost all of her screentime stalking him.

Unfortunately the plot still looms. One short scene exposes a tertiary character as a definite villain, and the preview exposes another. Although for all I know this is just another red herring. It is so utterly bizarre looking at the actual plot of "Hogu's Love" and realizing it is almost entirely red herrings. For a sense of comparison, "Hogu's Love" has had more red herrings than "My Secret Hotel". And "My Secret Hotel" was a murder mystery where the presence of red herrings actually made coherent thematic sense.

This was a pretty good quality episode, with the right mix of comedy and heart to consistently be very sweet even there are plenty of misses mixed in with the hits. All the same, it would be very accurate to say that the intermediate portion of "Hogu's Love" more than squandered all of the goodwill I felt after the first four episodes, and I doubt very much the drama's going to come out even by the end if writer Yoon Nan-joong is going to insist on giving Do-hee a martyr complex. Still, I appreciate the effort.