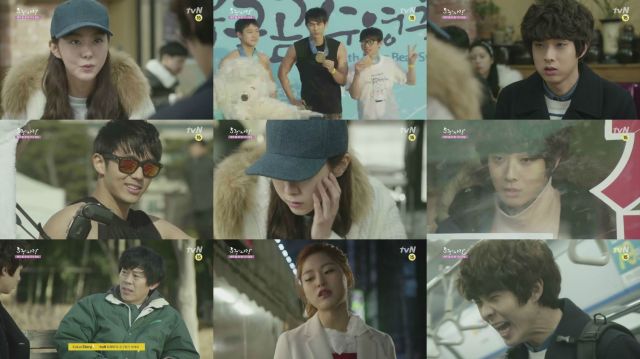 We open up with the exciting hook from the cliffhanger. Then it's straight to Hogu losing his marbles after a violent altercation at the squid shop. Very tantalizing, "Hogu's Love"- avoiding the interesting material to mess around in flashbacks (and flashbacks in flashbacks), just whetting viewer interest all the more for some actual exposition regarding the relationship between Hogu and Do-hee. Well, I can forgive that actually, for two reasons. In the first place, the framing device sets up a lot of funny jokes.

More relevantly, if you feel cheated by the way the plot's dragging, imagine how Hogu feels. Six months of waiting, and this is the resolution he gets? Just having to mull about scene after scene, while his friends and family try to cheer him up? By any rational measure they're right, and Hogu should give up. The one thing giving him the strength to have hope is Do-hee's silver medal. It's concrete proof that, if only for a moment, Do-hee wasn't screwing around with him. Do-hee did in fact expose herself, possibly for the first time ever, as a woman who's lived an imperfect life.

Contrast this with the Do-hee we see now, firmly ensconced in her own euphoric bubble. From Do-hee's perspective pregnancy is great- she can guiltlessly extort money, strangers are nice on the subway, and even Do-hee's doctor is oddly tolerant of her obvious falsitudes. And therein lies the problem. Do-hee is still dishonestly and selfishly manipulating people. In one late scene, a man calls Do-hee out on deliberately ignoring established rules for her own convenience at the expense of others. Rather than appreciate the extent to which she's depending on the kindness of strangers, Do-hee's immediate reaction is to lash out.

The big irony here is that even though Hogu is the one who gets hassled for believing in Santa Claus, Do-hee is the one with obviously unrealistic expectations regarding Christmas. The baby isn't going to put up with her nonsense. He's going to be whiny, demanding, and utterly unwilling to negotiate. Do-hee's survival up to this point has depended entirely on her ability to avoid interacting with other people. That's not going to be possible with the baby.

It's this powerful thematic strength that drives us to the cliffhanger. Hogu, forced to acknowledge his human failures by friends, takes a decisive step toward character development by challenging the world that takes him for granted. The parallel between Hogu and Do-hee is increasingly unmistakable- opposite ends of the social spectrum, exact same naïveté. If "Hogu's Love" is this compelling when dealing with Hogu's small issues, I can only imagine what will happen next episode when Do-hee implodes.