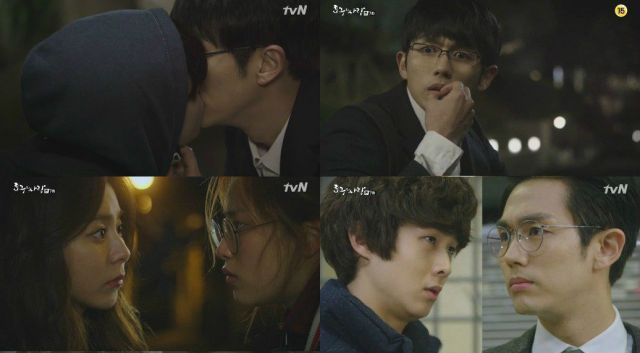 My last review for "Hogu's Love" was a bit harsh. It's not that I think my opinion was wrong so much as my expectations were probably unfair. First and foremost, "Hogu's Love" is a comedy. While the drama does have its moments of emotional tenderness those aren't the main selling point. As if to provide a pointed reminder of this fact, the entire first half of this episode is just Kang-cheol in apparently irrelevant flashback mode.

The situation is...rather weird and contrived, but that's the whole point. Kang-cheol is immensely disturbed by the mere existence of Hogu. Simply remembering these early encounters is enough to make the man oddly demure. A late meeting with Do-hee is strangely subdued as a result. Kang-cheol actually seems mildly frightened of his ex-girlfriend. Ho-kyeong is, in fact, striking a vengeful blow for womankind, but not at all in the way she was expecting. Ho-kyeong doesn't even seem to be aware of the real reason for Kang-cheol's change in attitude.

It's an especially funny subtext for the comedic portions. Anyone who's ever actually tried to apply the scientific method to dating knows that it doesn't really work that well. Ho-kyeong in flashback is just a less pretentious version of Ho-kyeong in the present day. And this works to make the first half of the episode a mostly amusing self-contained love story, even if it's a story that's only being told because of how characters will react in the present day. By the way, I really want Kang-cheol's shirt. That is one rad-looking shirt.

I was also quite pleased to find that Lee Do-yeon has finally been given some dialogue. As Do-hee's rival...well, she's not really much of a rival at all. The woman's actually quite amicable, and it's fairly obvious that the only reason they're not friends is because Do-hee's inferiority complex causes her to interpret almost everything as some sort of snide insult. That's what real self-confidence looks like Do-hee- the ability to be nice to people who obviously don't like you.

On that character note, Hogu has settled into the pseudo-heroic mode of being the baby's main advocate while also resolving by the end to strike a blow for justice. This makes a fine contrast to Kang-cheol, who's increasingly coming off as a reluctant villain. All in all "Hogu's Love" takes a turn this time for, if not being all that deep at least pretty charming- the kind of drama to put you in a definite up mood.