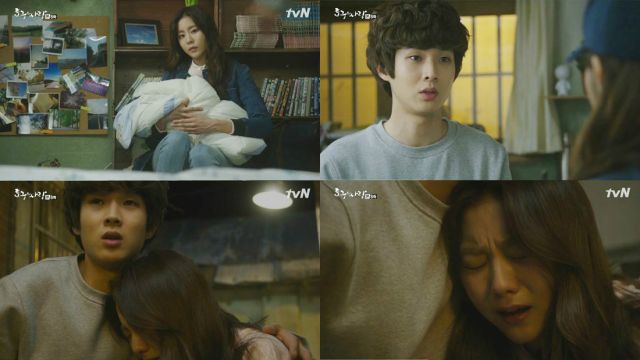 This time "Hogu's Love" tries to hit the middle ground between the absurdity of last episode and the profundity of the drama's opening sets. The effect is somewhat mixed, mostly because this episode is filler. One character learns an essential part of the story background- and that's really about it. Do-hee has a huge emotional epiphany at the end, but it's not completely clear why.

From the perspective of Hogu this is, of course, unsurprising. He doesn't actually know what's going on with Do-hee, mostly because she doesn't feel like explaining anything to anyone. The thing is, while it's nice to see Do-hee crack and show some emotional vulnerability here...more and more I'm finding that it's difficult to care. She's made a lot of bad choices and at the halfway point I'm seeing increasingly little evidence that Do-hee is actually going to meaningfully take responsibility for her mistakes.

As far as the jokes go...the main ones I can remember are mostly just a retread of last time. Hogu is attacking Kang-cheol based on very little evidence- indeed, we get clear hints here that the paternity situation isn't at all what it seems. But all of this just brings up more issues I'm not sure the drama is actually going to resolve. Is Hogu good or bad for acting like such a white knight? His behavior, while comical, isn't really appropriate- but if it's going to be justified by later revelations...well...

Ho-kyeong's storyline remains somewhat interesting, if underdeveloped. By her own admission she doesn't even like Kang-cheol that much- so why is she all broken up about it? Is she sad that revenge just isn't in the cards? Are we supposed to empathize with her, to some extent, because the drama's true villain is also currently shrounded in vague mystery? Or is Ho-kyeong mainly in the story to set up silly jokes, like how certain men will find just about any message from a woman to be adorable and attractive?

I honestly don't know. While "Hogu's Love" is still generally a good quality production, at this point we seem to be alternating between either no plot movement at all or zany sitcom antics. There's surprisingly little actual romance in this alleged romantic comedy- which might be why the last episode was generally enjoyable. There was a full half hour of high school silliness curled up there. Whereas now, it's not even clear what we're supposed to be looking forward to.