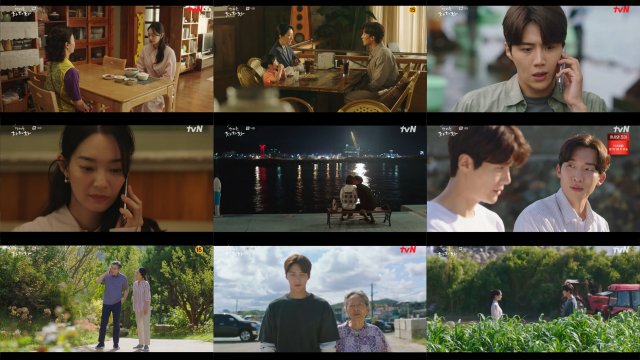 The unsubtle product placement of "Hometown Cha-Cha-Cha" continues to grate. First there's the whole bit where a big point is made of the lovable local cop buying our local dental receptionist expensive consumer goods. This is seemingly undermined by her insistence that such expensive tokens of affection don't matter to her. Then there's a tussle over a particularly nice handbag. And then later on we get close-ups of Seong-hyeon playing with his brand new phone, for some reason.

But at the end of the day such commercialist impulses are a less satisfying way of quantifying the appeal of "Hometown Cha-Cha-Cha" than the romantic aspects that are the drama's core appeal. So let's get into that. Hye-jin is annoyed at Chief Hong for his unwillingness to tell her his tragic backstory, and asks for a break. There's actually a fair amount of awareness about the cliche of how in real life that's just a euphemism for wanting to break up, despite the impulse being presented as mostly sincere in fiction.

There's no real satisfying movement in that direction since we only finally get a clear clue as to what's going on in Chief Hong's backstory with the ending. I don't have much optimism that this will be convincingly resolved. Really, I've had to give up on a lot of that. I only just realized this episode I have no idea who the actors playing the idols in the show-within-a-show even are, or if they're members of real boy bands. Which is really weird considering how they were initially introduced as relatively important.

Although not all the conclusions are unsatisfying. There's actually a really good explanation for the split between Yeong-gook and Hwa-jung. Even Cho-hee ties into it fairly convincing. The short of it is that Hwa-jung has always suffered from self-esteem issues and being taken for granted. The divorce was Hwa-jung taking this insecurity out on her husband, never knowing for sure how much he really cared.

It all comes down to poor communication as the real source of loverly troubles. And what Hye-jin realizes is that Chief Hong deliberately not communicating isn't the same thing as communicating badly. The important part is to make a sincere effort, and consider what the person you love considers to be a sincere effort to be when making that distinction. The final episode's are likely to be rather maudlin versus this comparably mature message. Still, I appreciate that message nevertheless.