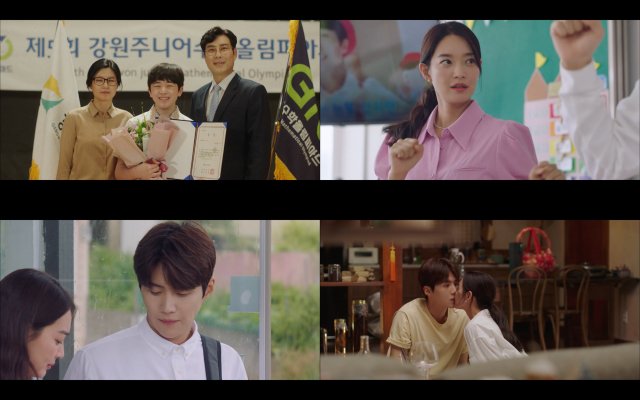 There's a surprisingly nuanced discussion of gossip this episode. Yes, Hye-jin spent the night at Chief Hong's residence and yes, she inevitably spotted leaving early in the morning like a sneaky cat. But is it necessarily wrong to speculate about what, if anything might have happened between them? I liked how the gossipers themselves started arguing about this in the midst of their poorly disguised spying, noting the complete lack of verifiable information.

An even neater twist pops up when Mi-seon pops up, and helpfully relays a great deal of useful information to Hye-jin. This was something the gossipers themselves surely must have expected would happen, since Mi-seon works as Hye-jin's assistant. What follows is a brutal yet hilarious scene that goes into just why everyone considers Chief Hong to be so incredibly cool, to the point that smooching a dentist from Seoul actually seems beneath his dignity.

As for Chief Hong himself, he mainly just starts talking a lot about food. It's increasingly impossible to ignore how much "Hometown Cha-Cha-Cha" is a love letter to country cuisine. There's talk of ox blood and its usefulness as a hangover cure, debates over the freshness of fish, and even a tense scene that involves the hearty whacking of dried fish. Chief Hong also goes out of his way to prepare tofu in his first scene, and proceeds to gripe in subsequent ones about how Hye-jin drank his special liquor for special occasions.

For Hye-jin, aside from all the gossiping, there's a noteworthy focus on her wardrobe. She explicitly hears, in insulting manner, how her conservative style of dress looks cheap. It's a powerful scene that really nails how one offhand insecurity driven in at the right time can mold a person's entire outlook. Because now that attention has been called to that fact, Hye-jin really does dress conservatively.

But Hye-jin also spends an inordinate amount of money on clothes, as we're reminded with the brief reference to her credit card bill. It's actually quite sad to see these facts so directly contrasted with each other, especially in the context of Shin Min-a looking amazing no matter what she's wearing. Shin Min-a really was excellently cast for this role- and Kim Seon-ho too for that matter. Both convey the perfect level of nuance for a character-driven drama that even now doesn't really have a plot so much as it does slightly more clearly defined mysteries.