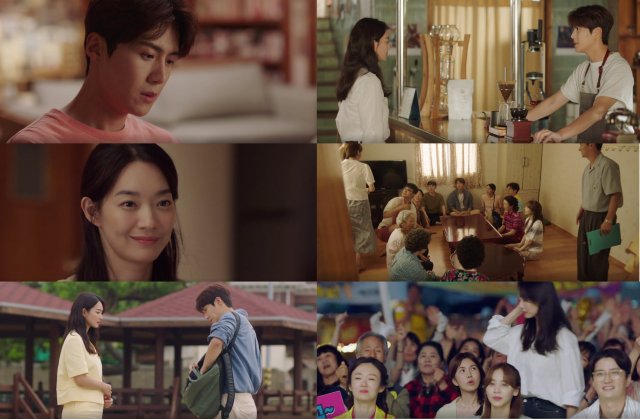 So the big bombshell is quickly acknowledged. The generally prim and proper Hye-jin got so drunk she kissed Chief Hong. The silent treatment doesn't actually go on for that long, since Chief Hong, in his hypercompetence, detects the change in Hye-jin's behavior and confronts her about it. The subtextual plot is all about renegotiating their friendship in light of this event. But the textual plot that dominates most of the energy here is once again a vignette about an individual townsperson.

Specifically Joo-ri (played by Kim Min-seo-V), the bratty teenage daughter of coffee shop owner and faded musician Choon-jae (played by Jo Han-chul). I was impressed how, despite her generally obnoxious behavior, Joo-ri continuously remains a figure of sympathy throughout the episode. Joo-ri actually has a surprisingly cogent explanation for why she holds her father in disdain. Joo-ri thinks he idolizes her departed mother too much and should meet someone new.

The obvious parallel with Hye-jin resenting her own father for eventually moving on is directly commented upon. But despite both Hye-jin and Chief Hong both participating heavily in Joo-ri's story, and offering strong opinions on whether Joo-ri should get corrective orthodontic surgery, ultimately the choice is left to Joo-ri. There's also an extremely effective transition as a public singing context also intersects with this story, and Hye-jin and Chief Hong must modulate their roles accordingly to account for an evolving situation.

The result is that this episode hits a lot of issues distinctive to South Korea, but not exclusive to it. There's Joo-ri's idolization of an idol group, her personal struggle with beauty standards, and then the entire notion of a public singing contest to begin with. While quaint, singing contests are a lifeblood for rural communities. The movie "Born to Sing" likewise remains one of my unsung favorites as an overlapping omnibus movie describing the various ways the individual South Koreans who participate in such contests tend to see them.

"Hometown Cha-Cha-Cha" continues to be a distinct love letter to South Korea's more out-of-the-way communities. Gradually we're also seeing this with the steady introduction of new characters involved in the broadcast of a travel food variety show. This, itself, is an extremely South Korean idea, albeit not exclusively, that's interesting enough to feel exotic while also relatable enough to emphasize that the denizens of Gongjin aren't really that different from us- or immediately, from a big city woman like Hye-jin.