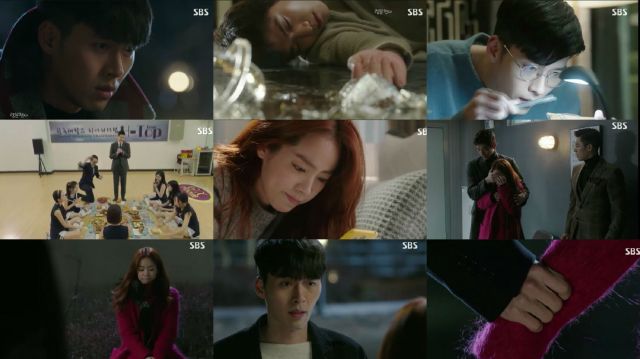 ...For whatever reason, I was expecting the cliffhanger of the last episode to have more impact on Seo-jin than on Ha-na. Seo-jin doesn't strike me as the kind of guy who receives that kind of compliment very often. And from Ha-na's perspective she's already practically dating Robin. Isn't liking a guy kind of a precondition to dating him? This really shouldn't come off as some sort of big revelation, and I'm rather confused as to why every character here insists on treating it as such.

If that particular story thread doesn't whet your interest don't worry too much, because we've barely finished with Ha-na's panicking when it's back to the murder mystery. Or was it a kidnapping mystery? I can't really keep track. I've also gone back to being unsure what his motive is. Now it seems like this guy genuinely wants to kill Ha-na. The only problem with that motive being it doesn't make sense. But then this is a recurring problem with "Hyde, Jekyll and I". It's almost impossible to tell which plot inconsistencies are clues and which are just bad writing.

One thing I can definitely confirm for sure right now is that the murder plotline isn't helping. It's possible my inability to appreciate the romance is just me being a mean old grump, but even an objectively excellent romantic comedy would suffer from suddenly transitioning to serious thriller mode. Especially when the plot points keep ending so anticlimatically. I really hope there's some sort of actual conspiracy going on here because otherwise the story's just completely incomprehensible.

Oh, and the somewhat childish Woo-jeong has become somewhat more relevant in the plot. Complete with male gaze, unfortunately. The reaction shots especially...ugh, just creepy. The fetishy connotations are really difficult to ignore, because as far as I know there's not really any legitimate reason for Koreans to dress up as cheerleaders. And even just from a practical standpoint, how does Ha-na only learn this stuff at the last minute?

The lack of clear internal logic or consistent narrative thrust wouldn't be such a problem here if I had any idea what "Hyde, Jekyll and I" is actually trying to do. The fate of the corporate power structure or the circus might be interesting if there was ever any sense of urgency. As presently designed, though, we don't even seem to be building up to anything except for the occasional violent argument between Seo-jin and Robin.

"[HanCinema's Drama Review] "Hyde, Jekyll and I" Episode 6"
by HanCinema is licensed under a Creative Commons Attribution-Share Alike 3.0 Unported License.