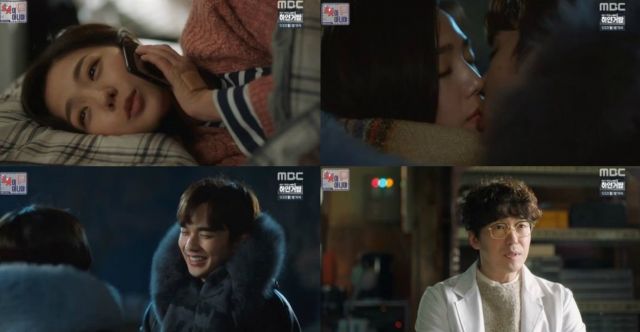 Min-gyoo and Ji-ah just have a big romantic heart to heart explaining exactly everything that happened back when Ji-ah was pretending to be AZ3 and why. The sting of the drama's more illogical plot points is taken out a lot when we have Min-gyoo realizing just how stupid he was for not noticing the inconsistencies sooner. And it's just as sweet that Ji-ah is constantly moving to reassure Min-gyoo that no, he is not stupid, and she never thought of him as a mark.

This is all great for the sake of their relationship. Even the cheesier parts of the dialogue, where Ji-ah is talking frankly about how she really felt when Min-gyoo was saying certain unintentionally romantics things to her, comes off really sweet. It's a side of Ji-ah we've never seen much of before. Fundamentally, Ji-ah is a lonely person, just like Min-gyoo. That's why she's been making such a sincere effort to mend their relationship, even to the point of begging him not to leave.

Unfortunately, this does not absolve Baek-gyoon or his team of their own ethical failures. While we never saw Ji-ah thinking of Min-gyoo as being stupid, Baek-gyoon and his team explicitly said that it was surprising just how gullible Min-gyoo was. The big speech Min-gyoo gives to Yoo-cheol rings very hollow in this context. Baek-gyoon and his team may have been acting guilty lately, but their intent from the minute of AZ3's short circuit was to intentionally deceive him.

Likewise, Yoo-cheol is completely right when he notes that the entire contract incident happened while they were children. Yoo-cheol had no idea what signing the contract actually meant, he just knew that if Min-gyoo signed it they could live together. By the time Yoo-cheol was old enough to figure out what was actually going on it's hard to imagine that Min-gyoo would have accepted the apology anyway, Yoo-cheol's betrayal being such an essential part of Min-gyoo's self-identity by then.

It would be easier to hate Yoo-cheol if he acted villainous anywhere else. We do find out about some evil stuff his dad was involved in. And also that the foreign investors are planning to use AZ3 as a weapon, somehow. But all of this is just too little too late. Anything "I'm Not a Robot" does outside of the central relationship between the two leads is a mess, and unfortunately, that plot is what's going to have to make up the final episodes.

"[HanCinema's Drama Review] "I'm Not a Robot" Episodes 27-28"
by HanCinema is licensed under a Creative Commons Attribution-Share Alike 3.0 Unported License.