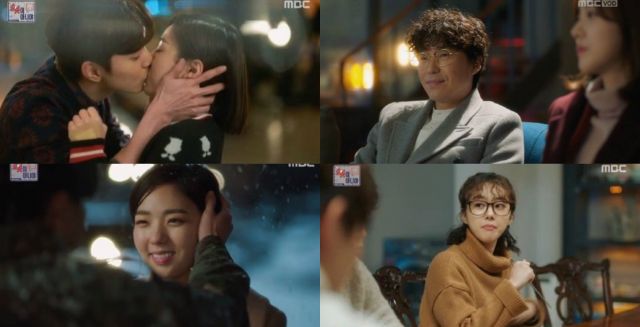 The production team is clearly padding for time, as the final episodes of "I'm Not a Robot" bring up some very weak last-minute conflicts solely so that the characters can demonstrate more minimal effort to solve them. Min-gyoo abruptly turns around from permanenently hating Yoo-cheol to just sort of idly forgiving him, which Yoo-cheol gladly accepts. Once more it's hard to take Yoo-cheol credibly as a villain, when it never seemed like he wanted to be fighting Min-gyoo in the first place.

Everyone else just sort of hangs around and does extended epilogue stuff. Everyone gets a girlfriend, or boyfriend, or little sister, or something to make life generally warm and fuzzy. At the risk of sounding like a grump, my main issue with this is that everyone's loneliness issues are solved way too easily. At its best emotional moments, "I'm Not a Robot" really nailed Min-gyoo's sense of social isolation, to the point it made other characters do serious introspection about their own life choices.

The revelation that Min-gyoo has to go do military service, an inherently miserable and lonely life experience for Korean men, is completely wasted in this context. The drama had a perfect opportunity to help us build solidarity with Min-gyoo, and realize that we are all Min-gyoo on the inside- and instead we just to Yoo Seung-ho looking dapper in his uniform as he comes back to see Ji-ah. The scene may be cute, but it's also unnecessarily generic.

Consider this. We see Min-gyoo go through a terrible grueling day of training. He's miserable, having never been run ragged before like this in his life. He's about to cry- then the heart ball turns on, and upon realizing that Ji-ah is thinking of him, Min-gyoo's worries all melt away. Other soldiers see the heart ball and want their own. All of a sudden, Ji-ah is a successful entrepreneur, and she didn't have to make deals with suspicious looking white guys in suits to do it.

That's another mistake "I'm Not a Robot" has made fairly consistently. It expects us to care about the characters' professional goals, solely because we're supposed to want to see them succeed. What I wanted, anyway, was to see them work together to make the world a better place. How exactly Baek-gyoon's robots are going to accomplish that, we'll never know, since the drama cuts out before we get an explanation. Oh well. I've seen worse.