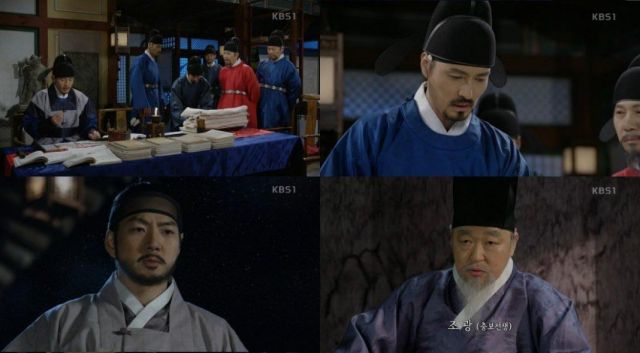 Hee-ji struggles with whether to honor his love for science or his love of not being threatened with murder by his political allies. It's taken awhile, but I think I'm finally appreciating Hee-ji as a sort of tragic character who debates which side is the right side for the sake of progress. I wonder whether the historical Hee-ji actually had to deal with problems anything like this, but whatever. I'm partially relieved if only to learn that for the most part the various characters in "Jang Yeong-sil - Drama" are in fact based on real people, what with the brief credits scene.

The structure is unusually wellorganized this episode. First, Yeong-sil has to solve the critical problem with his water clock. Then, he has to navigate the various political skullduggery necessary to get a proper hearing. Then, it's only after all that hard work by many involved people that there's finally a decent chance at success, and history is made. The synthesis of story elements is effective because they naturally lead into each other, and actually manage to make decent use of the class commentary.

Consider, for example, that even with King Sejong's official patronage, the Joseon court is organized in such a way that there are a large number of gatekeepers who are able to suppress Yeong-sil in ways initially bureaucratic and then, finally, violent. Yes the swordfight scene is goofy as always, but it's not all that out of place. Because the storyline was properly escalated (no gratuitous fires this time!) it's just a physically violent version of the verbal conflicts we've already been watching.

The science is a very appropriate front-end to this backdrop. Seeing Yeong-sil receive immediate,m obviously useful help really underscores that while Yeong-sil is the big brain behind the operation, he's only useful to the extent that other people are willing to help him. This dovetails nicely with King Sejong's brief meltdown wherein he realizes that perhaps communication is the real issue here, hinting that perhaps a Korean alphabet rather than a Chinese one may help with that problem.

While "Janbg Yeong-sil - Drama" has already squandered most of its goodwill on ludicrous action-driven plotting, it's episodes like this that give a good hint of the drama Kim Yeong-jo has been trying to make- a political thriller with a heavy dose of actual serious scientific explanations of the plot device and why it's important. They're tastes that go along well together, and I can only hope this will be followed up with science buddies sticking together for the sake of science.