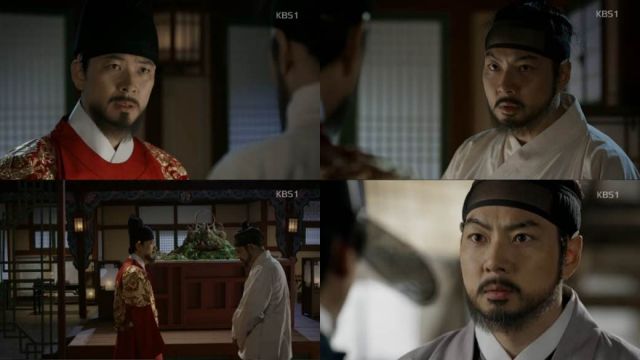 Yeong-sil struggles with another of the usual engineering problems for his current clock design as he works on a deadline. In an ideal world, this is all Yeong-sil would have to worry about. But in "Jang Yeong-sil - Drama", the scientist ends up being forced to think in terms of geopolitical questions. This time around, after deciding that they find Yeong-sil's super diorama clock to be more cool than morally offensive, the Chinese attempt to poach him as their own scientist.

Given all the political backstabbing that has dogged Yeong-sil at every turn, his inevitable refusal of the job offer comes off as less than convincing. I, too, remember way back in the beginning of the drama, when a frustrated Yeong-sil was trying to shove off to China in the hopes he would better be able to explore scientific discovery there. And what's changed since then? The conspiracies have only gotten more elaborate and absurd as time goes on, culminating here with disasters involving poor wheelcraft. Which again, is probably not something Yeong-sil should be responsible for.

In all fairness the wheel sabotage is one of the less outlandish plot points in Yeong-sil, since reasonably convincing context was at least set up in advance. In "Jang Yeong-sil - Drama" the problem has always been less the extremity of any individual plot point and more how new equally violent confrontations manage to pop up again after we've barely had enough time to recover from the last crisis.

This is especially difficult to forgive given that there have been several timeskips lately. Considering how Yeong-sil has obtained a fairly respected position among many of his contemporaries, that would seem to imply that Yeong-sil has been practicing science in peace for some time now. So why is "Jang Yeong-sil - Drama" making it seem like Yeong-sil was under constant threat of death when this obviously was not the case? The real-life personage could have been the victim of a dozen attempted murders and even then he still would have spent most of his time doing research and career building.

Maybe I'm just a weirdo who thought after the first few episodes of "Jang Yeong-sil - Drama" that the focus would be on science. All I know is that the current physically dangerous crisis Yeong-sil is in lacks urgency because I've seen it too many times by now. I also know that as an old man Yeong-sil will still traverse the landscape trying to accurately forecast eclipses, so there's no tension that way either.