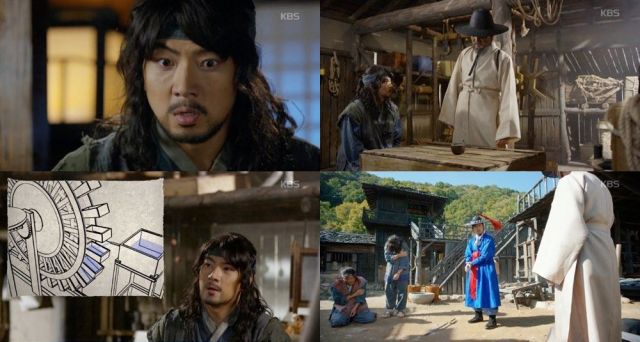 Like most historical persons from the early Joseon period, we don't actually know very much about the life of the real Jang Yeong-sil- so a lot of the story ends up having to be completely made up. I didn't mind this so much in the first two episodes of "Jang Yeong-sil - Drama", since by and large these were just kid Yeong-sil having adventures with science. And there's elements of that here too, as the production team gets into fifteen century clocks. Suffice to say, accurate timekeeping was much more difficult back before everything was digitized.

But by and large the story of "Jang Yeong-sil - Drama" has shifted toward the general antipathy powerful officials have toward Yeong-sil and his love of science, and the kinds of sacrifices Yeong-sil has to make to follow his dreams. If the emphasis here was on Yeong-sil that would have been fine. Unfortunately the production team makes the weird decision to have antagonistic characters be explicitly malicious, to the point of starting fires. It gets to be a tad over the top.

Thinking back the first two episodes has elements of this too, mainly with Yeong-sil's snotty cousin. The difference is that Yeong-sil's snotty cousin was a stupid bullying kid. The reasons offered for why Yeong-sil is considered such a dangerous person that he needs to be menaced like this in the present day aren't all that persuasive. The issues Yeong-sil has with his dad are equally unconvincing mostly because we never really got to see that relationship disintegrate.

The palace scenes have the same problem of just feeling very arbitrary. About the only important discussion we see is between King Taejong and his daughter So-hyeon (played by Park Sun-young). And this discussion is important not because of the content but because it introduces the adult version of So-hyeon. She's supposed to be important in "Jang Yeong-sil - Drama" somehow. As of yet, though, her influence isn't terribly clear.

I'm really hoping that "Jang Yeong-sil - Drama" makes more of an effort to move the story along a little faster. While there's a lot of genuinely interesting material here, right now the drama is stuck with a lot of uninspiring cliches that really seem to be more of an end to the means rather than something that's worth watching in the immediate sense. Even if interpersonal class issues were an important part of the historical story, they weren't the only part of that story.