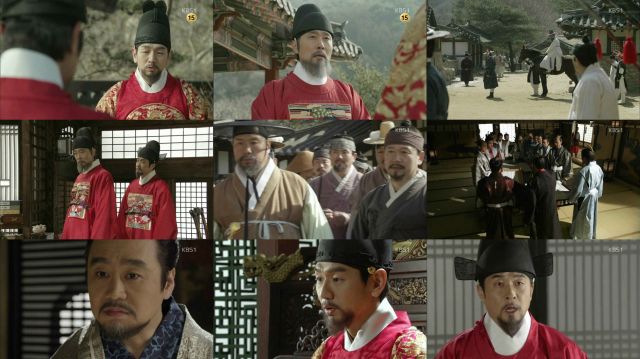 Something exciting almost manages to happen here- I feel somewhat guilty having to state that. "Jing Bi-rok" establishes, as usual, that while all of the people with real power are just messing around with political games, the actual ordinary population is genuinely in panic mode. From their perspective, this isn't an epic adventure narrative. The possibility of invasion means the possibility of widespread death and destruction. And that's very, very bad.

Circumstances have conspired almost perfectly to allow Hideoyoshi to invade Korea with much more success than seems reasonable. The Chinese are almost no help at all, and the domestic situation in Korea is practically on the brink of civil war. Lee Soon-sin's name is finally invoked here, less because there's anything for him to do so much as it is just a matter of desperation. Seong-ryong is out of ideas, and all the other characters are content to just hope all these issues boil over on their own.

"Jing Bi-rok" clearly aims to be a national historical epic. So it's honestly pretty weird appreciating just how thoroughly negative it is regarding pretty much every single character. There's no hero worship here, no serious consideration of the circumstances of the time and how decisions that seem stupid in retrospect originally seemed justified. Seong-ryong's very presence is a constant reminder that dissenting opinions were offered and ignored.

For what it's worth I suppose Korea comes off slightly better than China or Japan in this case. At least Korea has the one guy who has some idea what's going on. By contrast, we're not seeing any dissenting voices in the Chinese or Japanese scenes. I'm not sure whether this is because the writers have less material to work with from those perspectives or whether the only apparent positive attribute of the Korean people is supposed to be their ability to tolerate dissent.

I'm inclined to think of it as the former viewpoint, mainly because so little about the Korean political discourse examined here manages to inspires any confidence whatsoever. It's the same virtues and vices that we've seen in "Jing Bi-rok" to date- though I have to admit my interest is definitely whetted for Lee Soon-sin to appear. It's obvious that the problems in the Korean bureaucracy are way too severe for any one man to possibily fix overnight- and at this point, that's an even bigger problem than the actual Japanese army.