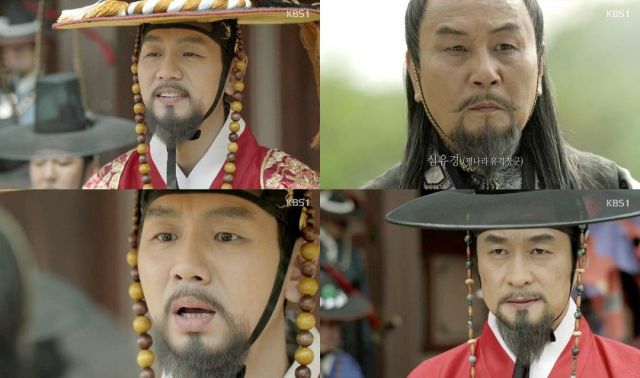 "Jing Bi-rok" is never really a particularly exciting drama, all these verbal fireworks and occasional fight scenes notwithstanding, because it frequently feels like the story is just belaboring the same general set of points. More military-minded fans will probably be more intensely interested in the way the battle movement lines are drawn, and how new tactical designs have to be meted out. As for me, well, at this point watching "Jing Bi-rok" is getting to be kind of a tiring experience.

It's not like the drama's ever misled us or anything regarding its overall intentions. Lee Soon-shin might represent the flashier part of the story, but here he's practically relegated to montage because there's not actually a whole lot for him to do right now except continue to win battles and make things generally miserable for the Japanese. The montage quite literally contains nothing new.

The political element does get a necessary infusion by the end, though, when a Chinese representative shows up- and as usual, manages to mostly be unhelpful. Sometimes I can't help but feel a little sorry for Seong-ryong, given the extent to which he has to deal with these problems single-handedly. Then I remember that he wrote this story, and that he might be making himself look overly sympathetic. Then I remember that everyone fully acknowledges that this whole conflict was a gross effort of mismanaged incompetence so...well, that's that.

I'm not liking "Jing Bi-rok" quite so much as I used to overall because lately there's less in the way of flourishes. The production team appears fully committed at this point to making this drama a pseudo-documentary more than anything that might be easier to export. For those of you history buffs with a keen eye of appreciation for reality rather than narrative embroidery, this shouldn't be too much of a problem. For everyone else, "Jing Bi-rok" is increasingly moving into novelty status. I'm more glad that this drama exists abstractly than I am excited to actually watch it.