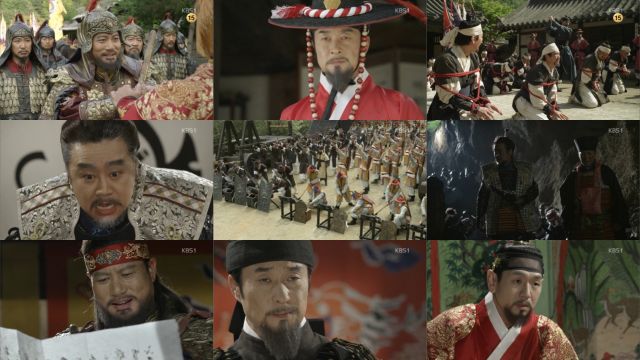 During the sixties and seventies, the Park Chung-hee regime strongly pushed Yi Sun-shin as a model of the truly noble quintessential Korean man- a soldier who was great because he won battles, and was unfortunately and tragically persecuted by jealous, incompetent civilian officials. I bring this up because at this point it's clear that "Jing Bi-rok" is trying to push a more nuanced interpretation of that political environment. Ironically, it would seem that the eventual paranoia regarding Yi Sun-shin wasn't actually so much a problem with Koreans or the Japanese so much as the...Chinese allies?

Even though the help of the Chinese military is welcome and badly needed, there's a sheer arrogance in their attitude that's constantly unsettling. Even though these guys are just supposed to be helping out, they're acting like they're the ones who really run Korea. This, too, is a modern political point that goes on to this day- whether or not China really ran Korea in antiquity.

All of this is pretty much totally irrelevant to anything that actually happens in this episode. But then that's the whole point of historical study- it's not looking at the war in a dramatic vacuum. We're supposed to be considering how these events relate to our understanding of the Korean state. And from that perspective, Yi Sun-shin doesn't even have to show up for us to consider that just because the Korean government is paranoid doesn't mean that no one is out to get them.

From that perspective Seong-ryong has it easy. He can actually see the traitors right in front of his very eyes, being rounded up by trustworthy subordinates. Even if the Chinese are able to win battles, having two foreign armies on Korean soil isn't necessarily that big of an improvement over just the one. The Koreans will be in a rotten spot if they repel one invasion just to become the permanent subjects of a new occupying army.

And yes, the current American presence on Korean soil would probably be a germane analogy to this situation. Because that's what history is- a repitive cycle of similar problems which leaders are chronically unable to solve. Note, too, that the Chinese strategy for victory tends to involve a lot of their own guys getting killed. These guys are good but they're no Yi Sun-shin. So you can perhaps see why Yi Sun-shin might seem like a way more dangerous threat.