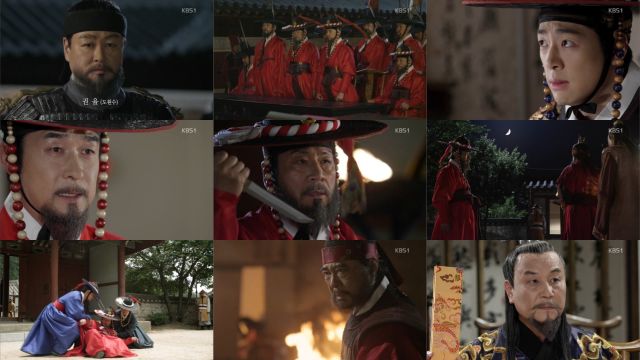 Concerns about war take a back seat this episode as the bulk of "Jing Bi-rok" moves back to political maneuvering. Big words like reshuffling and abdication are thrown around- well, I'm not really sure those are the actual words. It's difficult to fully grasp everything that's going on in "Jing Bi-rok" because the vocabulary is really elaborate- even more so than a typical costume drama. I'm just glad the production team keeps defining the more obscure words for us.

Anyway, the Chinese have a very direct stake in making sure the political situation goes the way they want it to. Why? Well...that's a good question actually. The Chinese can't seem to decide whether they just want to go home or whether they want to rule Korea as a kind of puppet kingdom. It's a fact that takes on particular irony considering how in the early portion of the drama the Chinese didn't particularly want to bother with the Korean peninsula at all. So why the change?

I'm not going to purport to have any idea of all the exact particulars- "Jing Bi-rok", even at its most detailed, can't answer a question that elaborate. But I can confirm that large international powers aren't always the best at being consistent and logical. Take the United States. The country went from borderline isolationism in the thirties to meddling in the internal politics of nearly every country that would let them in during the Cold War. This was due to the perceived threat of international Communism.

And in "Jing Bi-rok", it's the perceived threat of the Japanese that's emboldened the Chinese. Yet paradoxically, by the end of the episode the Chinese have come up with a goofy, convoluted plan that will just make it more difficult to fight the Japanese, and the justification for this is that they need Korea strong enough to defend itself but not so strong that they can be truly independent of the Chinese alliance.

If that sounds familiar, it's because modern American foreign policy has almost the exact same problem. We want foreign countries to be free-thinking Western democracies, but we don't want them to disagree with us. That's quite literally an impossible balance to strike, and in the same vein, the political machinations in "Jing Bi-rok" are doomed to promote another hopeless cycle of war. The irony is a palpable one- even as the story is several centuries old "Jing Bi-rok" is always oddly relevant.