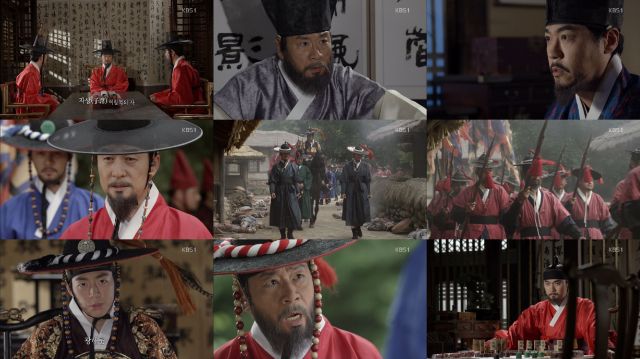 The language in "Jing Bi-rok" is so consistently thick that I honestly have trouble following it even in the best of times. But in terms of story structure this episode is particularly challenging. The Chinese and the Japanese both lack much presence here, so there's no villains / other civilization for us to compare to when it comes to the general dysfunction of the Korean government. Consequently, I can barely even detect a plot arc here- that much might be more obvious if I knew more about the historical context.

As usual this isn't exactly new material. Several plot points ago issues at the Korean court were the main follow-through point, and I had just as much difficulty engaging the story back then too. The main difference is that the proposals this time are somewhat more extreme, as befits the more extreme nature of the situation. Radical reorganization is, well, radical, but whatever the Koreans have been doing up until now hasn't really been working.

It's easy to feel sorry for Seong-ryong. Even though he has the intellectual ability and to some extent even the political allies necessary to accomplish change, at the end of the day even Seong-ryong doesn't really have any idea what he's doing. This dysfunction has been going on for a long time. The war exacerbated these problems, but the political crisis just makes the issues more difficult to solve, not easier.

In that context, thank goodness for Lee Soon-shin, who can always be counted on to properly train the troops and generally just do his job. I've mentioned it before but it bears repeating- what Lee Soon-shin did was heroic and amazing. Even so, it's only on a very rare occasion that Lee Soon-shin actually has to take political considerations into account. Most of the time he just communicates with his superiors by letter. And that's not the most flashy method of exposition.

Really, probably the most generally interesting thing this episode is that we finally see some hangul. At this point in Korean history hangul was still relatively new, to the point that the Chinese and the Japanese didn't have any idea what it was. That made it an ideal language for military communication. Of course, here it's just being used to inform the common people of some important information but still. It's the backdrop that makes "Jing Bi-rok" more interesting than the finer points of the plot.