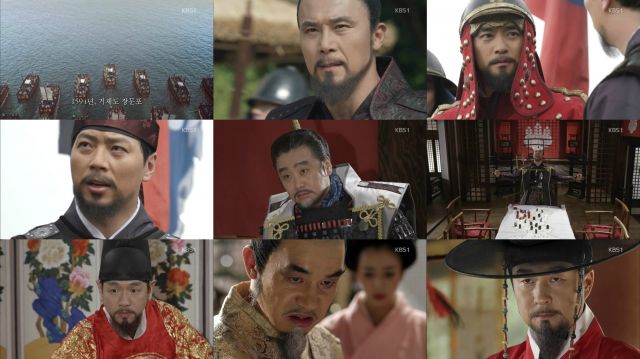 I really do wish I had some idea how the Japanese view the invasion of Korea. Often in "Jing Bi-rok" I feel like the Japanese are being treated as unreasonably evil. And yet at the same time everything that happens is based on real events, and it's obvious that whatever talk of surrender is being floated around now, the Japanese do manage another invasion in the near future, and this invasion almost certainly would have destroyed the Korean state if not for Yi Sun-shin.

Speaking of Yi Sun-shin, things are not going well for him right now. Because it increasingly seems like Yi Sun-shin isn't actually needed to protect the Korean state, political elements are now conspiring to get rid of him. Admittedly, if we try to look at the situation from their point of view, this isn't quite as crazy as it may sound. If the Japanese really are surrendering, then it does make sense to do more internal political positioning.

This isn't just a Korean story either. Look to nearly any long-term war anywhere, whether it be in the West or the East, the past or the present, and you'll see a political situation where people stubbornly refuse to believe that they could have been wrong even when the results of failure are staring them straight in the face. However much the Japanese look at the little war map those red and blue pieces aren't moving anywhere.

And also as per usual, the plot "Jing Bi-rok" manages to set in a sense of fatigue. Watching this drama sometimes feels like watching an endless history lesson- which of course is accurate. "Jing Bi-rok" has always been all about explaining what exactly was going on with this war, and even in the best of circumstances the subject matter can ge to be a little drowsy. My general lack of cultural context doesn't help. But even from the foreign viewpoint, every little bit of the drama gets us just a little bit closer to figuring out what was going on.