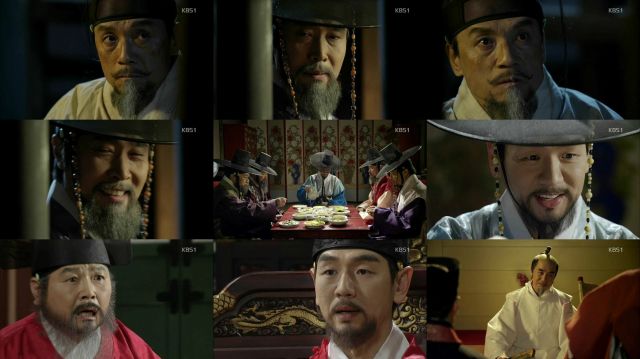 It's back to political vacillation as "Jing Bi-rok" spends most of the episode having officials engage in abstract arguments about the best possible foreign policy in the current situation. Interesting, most of the discussion actually revolves around what the Chinese are doing- even though the Chinese don't actually seem to present to discuss the problem. That's kind of a bad sign- lots of mistakes have been made so far, and even that should be enough to establish that the Koreans can't move forward on their own.

Meanwhile, on the lower level, actual refugees start to show up. And I really do enjoy the conversations that are had any time the officials manage to run into actual normal low class people. They can't wait for the country's leaders to get their act together. People living on a day-by-day basis have to make a concerted effort to move around quickly enough that they don't end up getting killed because of everyone else's incompetence.

And that's...really about it I'm afraid. More and more I'm finding the quantity of exciting sequences really does determine how enjoyable any individual episode of "Jing Bi-rok" is. There's almost no visual flair here, and even the points I mention above make up a relatively small portion of the overall story. If you like the political backdrop, and listening to the way decisions are actually made (or not) on the higher levels, then you'll like this episode of "Jing Bi-rok".

Context does make a useful appearance, at least. I think I've seen political discussions at gisaeng parties in countless Korean dramas and films by this point, but this is the first time that the women were really just sitting there, kind of listening awkwardly while waiting for the party to continue. I couldn't help but wonder- are these really the sort of discussions that need to be had in front of people who aren't directly related to what's going on?

Of course, everything that goes on here is going to affect everyone in Korea eventually- that's the whole problem. That's why the cliffhanger, where King Seonjo is just once again employing useless dramatic hesitation, is irritating on multiple levels. It's not good storytelling for "Jing Bi-rok" to be so repetitive, but at the same, the invasion didn't happen over the course of a single fortnight. This was an ambitious project that had to be provoked by a lot of weakness. And poor Seong-ryong has to be the guy that sees it all coming.