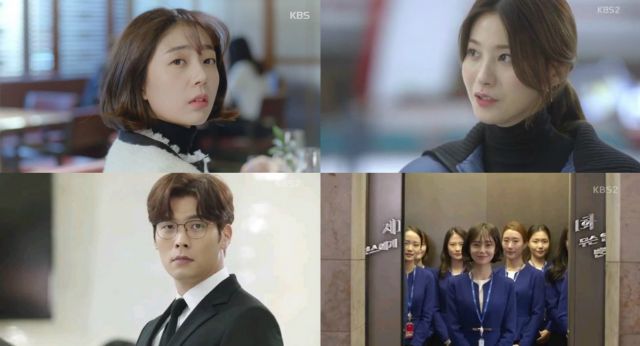 Yoon-i (played by Baek Jin-hee) is an exceptionally competent secretary. Unfortunately, she's just a little too competent. Her boss Mr. Bong (played by Choi Dae-chul) constantly has Yoon-i on-call, even when Yoon-i is is trying to have a cute romantic montage with her boyfriend Kyeong-joon (played by Sung Hoon). Worst of all, Yoon-i doesn't express any kind of discretion when it comes to the kinds of jobs Mr. Bong assigns her, which ends predictably poorly.

Most of the humor in "Jugglers" comes from this obvious irony. When it comes to any kind of clearly defined task, Yoon-i can conquer any obstacle and endure any discomfort in order to maximize success. But because Yoon-i is always so fixated on the short term, she's completely incapable of realizing that in the long term, her personal and professional lives are going disastrously. Yoon-i is wasting her potential. The poor woman is just too pig-headed to realize it.

Baek Jin-hee is the main obvious highlight here. Her mix of competence and incompetence is exceptionally relatable. But director Kim Jung-hyun-III also gets a lot of credit just for having perfect comedic timing on every minor gag. Even the random foreign actor gets a pretty good laugh just by briefly defying a trope only to back down immediately mostly because his character isn't important enough to have more than a few lines of awkward English.

As for the plot, well, there isn't really a plot just yet. So far "Jugglers" has expended most of its energy explaining who Jin-hee while setting up a situation intended to justify her jumping headfirst into a completely new personal dynamic. The characterization is quite effective. We've seen Jin-hee react to such a wide variety of situations by the ending that there is an excellent sense of where her strengths and weaknesses lies. What's lacking is, again, simply the discretion necessary to pick the right battles instead of letting other people hoist them on her.

"Jugglers" is a very traditional drama. It is not wedded either to concept or formulas. The whole story structure is refreshingly chaotic, with Yoon-i juggling (hoho) so many problems at once that I was always at the edge wondering whether or not she was going to pull off that particular gambit. Even when success of failure is obviously telegraphed, once again, strong direction allows the joke to land fairly solidly. The drama's off to a good start.