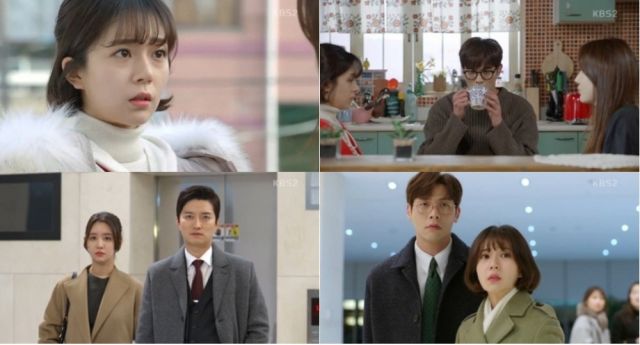 Secret relationships have never been a trope I particularly liked, although "Jugglers" really does take them to the next level in terms of sheer annoyance. All of the conflict is entirely because Chi-won and Yoon-i have decided to have a secret relationship for no good reason. The reason the Mr. Bong thing blew up into a scandal was because he was married. Chi-won is not married, at least not anymore. So at worst this is sexual harassment, which would be a problem for him, not her.

Another annoying factor here is how Chi-won has not discussed this matter with Mr. Do, when from what we can tell Chi-won talks to Mr. Do about everything. Even ignoring the professional importance of having at least one superior in on the secret, and thus on Chi-won's side, look at Do-hee. By the far the easiest way to let Do-hee down would be to just tell her that he is seeing someone else, yet Chi-won can't do that when the relationship is a secret.

Which is a real shame, since the best scenes here are the ones that go into Chi-won's philosophy about relationship. We can actually see why it didn't work out with Do-hee- because Chi-won is married to his job. In a way, the only person Chi-won could possibly have a serious relationship with is his secretary, because that's the person who must explicitly collaborates with Chi-won that he may do the best possible job he can.

There's also a good joke in here about the more carnal purpose of relationships, and how they can be made impractical. Now this is the kind of humor that works well with the premise. However ultra-competent Chi-won and Yoon-i may be, they are still only human and can fail in awkward, humiliating ways. Even the secret relationship could work if it was being treated as a consequence of their own flawed thinking, rather than just a thing they are supposed to be doing because it's a genre standard.

That Mr. Jo has to be the one to put an end to that stupid storyline is frustrating, because his actions demonstrate that Chi-won and Yoon-i are incapable of managing character development on their own. I'd like to see the characters in "Jugglers" actually learn from their mistakes and do better because of them. Instead they're always being made victim to circumstances beyond their control, and consequently, lack agency.