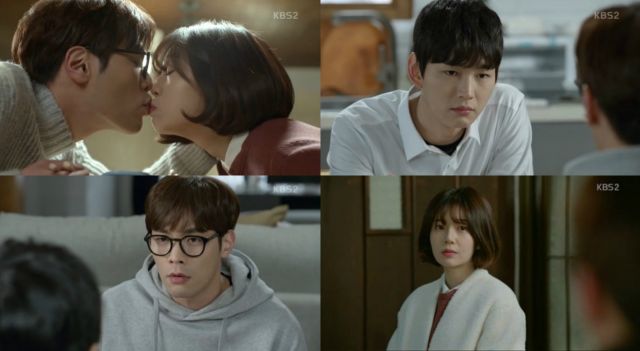 Once again "Jugglers" is able to salvage the relationship between Yoon-i and Chi-won by having them act like professional adults in the face of a bad situation. Yes, naturally Yoon-i is horrified and freaked out by the way her relationship with Chi-won has been outed. All the same, Chi-won is right there to remind her that this is not the end of the world. More importantly Chi-won is plenty willing to give Yoon-i emotional and physical space to recover, which is especially essential since a company investigation is now necessary.

The investigation is pretty lightweight, as is to be expected. Yoon-i and Chi-won's actions, while in violation of the spirit of anti-fraternization policies, don't really go against the letter of such policies. Yoon-i is clearly more hurt by the idea that someone would go out of their way to attack her like that than she is worried about the possible employment consequences. That this conflict reaffirms, rather than damages Yoon-i and Chi-won's relationship is thus fairly sweet and compelling.

Unfortunately for all the sudden improvement in the relationship between Yoon-i and Chi-won we get equally as much devolution in the one between Jeong-ae and Bo-yool. But that much was baked into the premise. For reasons I still can't grasp, writer Jo Yong felt the need to have Jeong-ae take the secretarial job under false pretenses and a false name. The woman's husband is gone, the son hates her, and she's being chased by debt-obsessed gangsters. What possible more conflict could she need aside from all that?

Although really, the bigger problem is that Yoon-i had to help Jeong-ae do all these things. While Yoon-i probably can't be fired for entering into a consensual relationship with Chi-won, she absolutely could be fired for helping someone doctor their resume and lying in a recommendation letter. That reminds me- if Jeong-ae has been using a false name at the company, how is she cashing her paychecks? Just how far does this fake identity go?

That's not a rhetorical question. It's genuinely unclear to me whether that plot point is supposed to be interpreted in a professional context or if it's just an excuse to wring more melodrama out of Jeong-ae's situation. Neither explanation inspires me with a lot of optimism. In the first case Yoon-i is so obviously at fault it would be difficult to root for her, and in the second place "Jugglers" is really bad at melodrama.