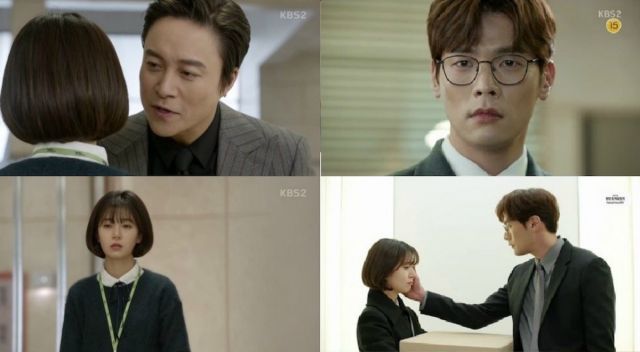 So Mr. Bong has returned to the story. Good thing I figured out Mr. Bong and Mr. Jo were two different characters already or I would have been really confused...anyway, Mr. Bong's main purpose here is to confuse me as to how the company's human resources policies are supposed to work. By what standard is a consensual romantic relationship cause for dismissal, but delegating a secretary to buy lacy underwear is not?

Well, the obvious reason for that is because Yoon-i did not and will not file a complaint. It remains unclear whether this is because Yoon-i is too dumb to utilize human resources, or because she is smart and is aiming at a more elaborate long term plan. In real life, of course, workplace sexism is such that Yoon-i may as well not bother, but "Jugglers" has not developed this particular element so I'm loathe to give the drama that much credit.

Granted, the drama put me in a bad mood right from the beginning because we have to have the whole tearful scene of Bo-yool discovering Jeong-ae's pointless lie, and all the hand-wringing that comes across from that. All I could think of during those scenes was how utterly preventable that entire situation was. Once again, Jeong-ae already has so many existing problems that this storyline is a frustrating waste of time that prevents Jeong-ae from dealing with any of her more interesting problems.

As compensation for that, at least the relationship between Yoon-i and Chi-won is growing strong. I like that they are forced by circumstance to not live in the same house, because it allows the subtleties of their relationship to manifest in subtler ways. We get to watch Yoon-i and Chi-won show that they care about each other without being too explicit about it, which makes their relationship feel quite a bit more sincere than when they were doing standard romantic comedy stuff.

The jokes remain fairly limited in function. They're based largely on broad slapstick. I'm not really sure that's the right word for characters trying to chug cold water but uh, yeah, the jokes are so dubious they defy easy classification. At least we've finally got a clear idea of how Mr. Jo is actually a bad guy. His nefarious business goals are finally explained. Of course I'd rather be rooting for Chi-won than against Mr. Jo but I'll take what I can get.