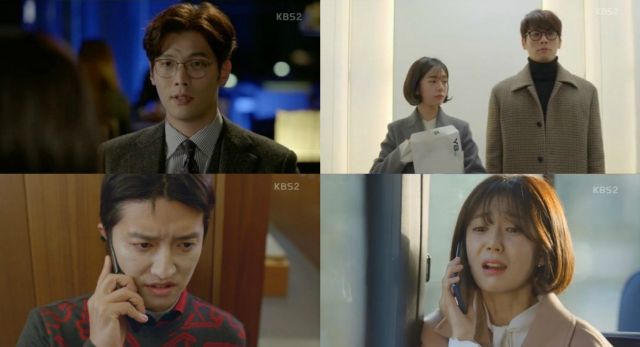 Chi-won (played by Choi Daniel) is an up and coming executive who is exceptionally cold to nearly everyone around him. Even the fleeting moments of kindness he has shown to an obviously distraught Yoon-i have always been performed under the attempted guise of anonymity. Chi-won is impatient for results and doesn't tolerate slacking off. So you'd think Yoon-i would be the perfect secretary for him except that "Jugglers" is still in the evading the premise stage of the story.

...Well, OK, that's not completely fair. There is an elaborate plot about Mr. Bong attempting to use Yoon-i to infiltrate Chi-won's office. But it's hard to get that worked up about Mr. Bong's motivation since neither Chi-won nor Yoon-i have any idea what he's doing. Honestly, I'm kind of surprised Mr. Bong is still hanging around at all. Mr. Bong wasn't in the original cast list, which gave me the impression that he wasn't going to be important after the first episode.

It's not as clear what Chi-won suffers from. We do get tantalizing hints in the form of a nasty scar, an involuntary flashback to a fire, and a visit to remembrance hall. What most concerns me is that we have no real reason to want Chi-won to succeed. Sure, there are occasional flashes of his being a nice person, and we know for a fact that Mr. Bong is a huge fink. So if someone has to succeed obviously we're going to root for Chi-won.

But the entire reason why Yoon-i is so emotionally devastated right now is because she was excessively devoted to Mr. Bong's success without ever stopping to think about what she was actually trying to help him do. Indeed, Yoon-i's happiest moment this episode has nothing to do with her boss. It's when she goes into hyper-secretary mode to fix all the disasters afflicting her new co-workers. A feat that I admit would have been more impressive if any of those characters had names.