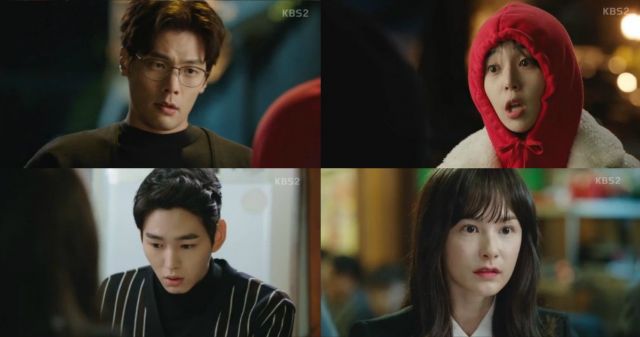 Chi-won has this habit of quickly getting annoyed with people and promptly ending conversations before they've even really started. Narrative-wise this habit is frustrating, since it prevents Chi-won from getting involved with any kind of actual plot. But at the same time it's actually fairly refreshingly comical to watch a hero be completely immune to the villain's various schemes because the villain is such an obvious dork that listening to them at all is obviously a total waste of time.

Mr. Bong's credibility as a villain is further undermined by how he obviously believes that Yoon-i is acting as his spy. At least, Mr. Bong's clandestine behavior when contacting her would seem to imply as much. Unfortunately Yoon-i doesn't appear to understand this aspect of the story at all. Mr. Bong's instructions confuse Yoon-i, but because they serve no obvious malicious purpose, she just assumes that they must serve the greater company somehow.

This joke, while moderately amusing, is at odds with the character development between Chi-won and Yoon-i, which centers around Yoon-i wanting to get to know him better so that she can be a more effective secretary. On the face of it this is a fairly interesting concept. I don't actually have any idea what a good secretary does, but it is obviously a skilled position, so clearly Yoon-i must have some sort of larger rubric in mind that determines her actions.

Alas, "Jugglers" cannot maintain continuity long enough for this point to be particularly well-explained. A late cameo by Choi Yeo-jin as a secretary field seargent greatly confused me, because we had already seen Yoon-i teaching secretary classes. One would think all the other secretaries at this particular company would already know who she is, especially given the circumstances by which she left Mr. Bong's service.

...Wait, Mr. Bong and Chi-won do work for the same company right? Or am I getting confused because that's the most obvious way Mr. Bong could organize it so that Yoon-i works for someone who is technically his superior? We know surprisingly little about the corporate structure of the YB Broadcasting Corporation, or what exactly it is that they make (TV Shows? Newspapers? Advertising?). Normally for a drama to feature characters working for a generic large corporation isn't a big deal, but when literally their only motivation is to do their jobs I'd kind of like to know what their jobs are.