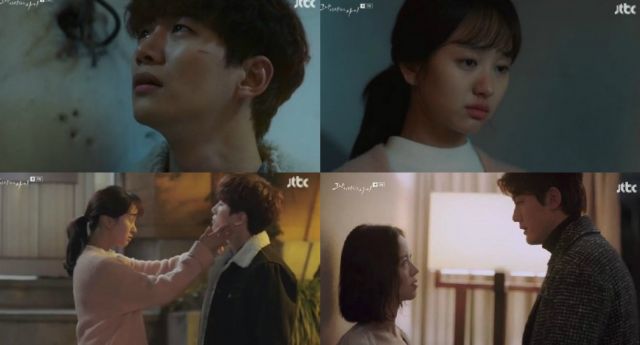 The person who manages Lee Junho's makeup, as well as the person in charge of continuity, are very good at their jobs. That very specific praise is prompted by Kang-doo's facial wounds, which are always changing just slightly from scene-to-scene. They slowly heal over time, but then he gets another one. I'm surprised those specific members of the production team are able to keep the wounds so consistent. It's a thankless job that can be very easily screwed up.

The facial wounds are extremely important thematically, because we know Kang-doo is undergoing the same internal transformations. His relationship with Moon-soo is prompting emotional recovery, yet every so often we still get an outburst that sets him back a few steps. But compared to previous rumbles, we can see Kang-doo pulling his punches and settling for just mumbling under his breath so long as the original problem has been solved.

Observe also how the real big wound ends up coming from a completely selfless act. Or was it really? Even with no obvious villain to face off against Kang-doo really has a knack for finding the most dangerous possible way to resolve a problem. The comment of his acting like a superhero is apt- normally we'd think of a person acting this way as being someone who wants attention. But no, Kang-doo just wants to be hurt.

The inevitable revelation of who Kang-doo and Moon-soo really are will, ironically enough, give Kang-doo far more hurt than he had bargained for. I feel like we're being set up for Kang-doo to hurt himself by breaking up with Moon-soo just to save her. Normally this tried and true trope is terribly annoying, but the way Kang-doo's psychosis is defined such an action would actually make perfect logical sense. Kang-doo desperately needs other people to worry about in order to avoid self-destructive behavior, but at this point he's pretty clearly addicted to it.

Of course, I would not go so far as to predict this is actually definitely what's going to happen. Moon-soo is by no means a love martyr. To the contrary we constantly see how she needs this relationship a lot less than Kang-doo does. Personal trauma notwithstanding, Moon-soo is a very stable person emotionally and capable of thinking in terms of her own self-interest. What an odd way to quantify things- Moon-soo's capacity to be selfish is what makes her stable and ironically enough, much more tolerable to be with socially.