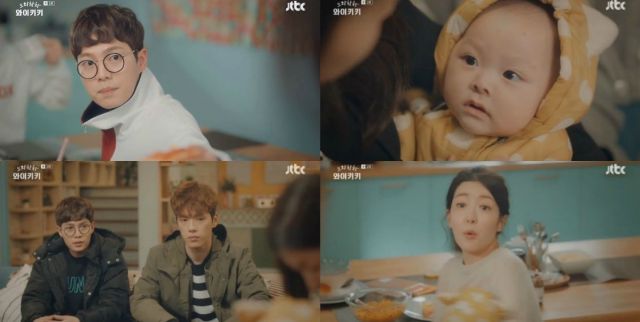 Dong-goo (played by Kim Jung-hyun) had a dream. It was a dream about Hawaii, a place where people go to have fun. People also come to Korea to have fun. So Dong-goo thought, he would live in a large apartment with his friends and brand it as a guest house in order to defray the costs of rent, since none of them have regular jobs. Alas, the plan has its pitfalls. The guest house isn't that profitable. Also weird stuff keeps finding its way into Dong-goo's mouth. Then the baby shows up.

Ah, the baby. That symbol of adulthood, since only adults can create and take care of babies. But babies are so...demanding. Sure, Dong-goo does his best to take care of the baby. Like life itself, Dong-goo is determined to succeed no matter how many stinky failures are thrust in his path. Incidentally I liked how the baby is a girl baby. I, too, just assumed that it was a boy baby, since for no good reason I can think of almost all babies in media are boys.

"Laughter in Waikiki" features one indignity after another- its characters survive only because none of these indignities are powerful enough to kill them. There's just the emotional pain of failure. Observe how Joon-ki (played by Lee Yi-kyung) fails at his job for the weirdest possible reason. Incidentally, I like to think that Park Sung-woong always acts this way on set, because his behavior really is just so incomprehensibly cool.

Everything in "Laughter in Waikiki" is transparently ridiculous like this. Every few minutes there's great new gag that warrants either a genuine laugh or a helpless cringe as the characters continue to make fools of themselves. But then the production team is in good hands. We've got Lee Chang-min-I, director for "Birth of a Beauty" and screenwriter Kim Ki-ho of "Modern Farmer" on deck- now those dramas were funny.

They also suffered from serious pacing issues later on. But so far "Laughter in Waikiki" is pretty brisk. In short order three of the lead characters have major long-term goals (Dong-goo even gets two!) and the other three already have clearly defined roles. Doo-sik (played by Son Seung-won) is the straight man. Soo-ah (played by Lee Joo-woo) is the cool aloof and successful ex-girlfriend of Dong-goo. And Seo-jin (played by Go Won-hee) just kind of stumbles into the plot by accident and is forced into a major role as the straight woman.