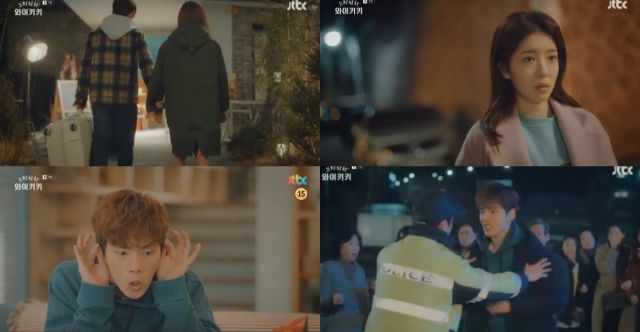 So apparently Soo-ah's new boyfriend was a con artist, and Soo-ah is forced to endure even further humiliation before being able to show enough humility to move into guest house. Was I supposed to feel like Soo-ah deserved this? Now, if Dong-goo's roomates expressed consternation about Soo-ah moving because they always disliked her, that would be one thing. But "Laughter in Waikiki" is acting like Soo-ah is an unsympathetic character simply for breaking up with Dong-goo in the first place, when all of her reasons for doing so have since been vindicated

I know "Laughter in Waikiki" is not actually being misogynist here, because the whole "humiliate such and such character for no good reason" has been a comic sequence for nearly everyone at this point, especially the male characters. But that impression is very hard to shake, because Soo-ah's main personality trait is just uptown girliness, and her humiliations have nothing to do with this characterization. I don't know, I guess her behavior during the handbag sequence was a tad airheaded.

Well, granted, this ignores how last episode Joon-ki starved himself to death for the very fundamentally creepy reason of wanting to do a bed scene with a famous actress. But since "Laughter in Waikiki" doesn't care about its own continuity, why should I? The huge crisis of the guest house being plunged into massive debt because of the fake wedding is solved abruptly, robbing the drama of its main potentially interesting conflict.

All these issues with the narrative tone and structure would be a lot more forgivable if "Laughter in Waikiki" was actually funny. Unfortunately the jokes lack any kind of surprise or bite. We barely ever even see the baby anymore. Way too much energy is dedicated to Dong-goo agonizing over whether he likes Yoon-ah. I mean good grief what is he, twelve? This is what I mean when I write that Soo-ah's break-up reasons have all been vindicated.