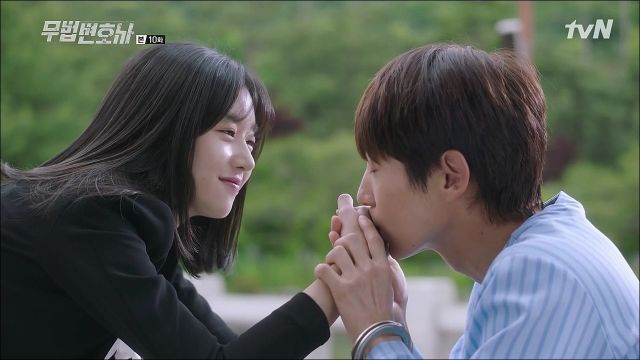 So now Sang-pil is stuck in the hospital. Everyone comes by to cheer him up, not that Sang-pil needs much cheering up. I'd like to think this is mainly just a matter of his being smug. That incomprehensible Sang-pil made to just stab himself in the middle of a fight is actually give a really good explanation here. And of course, there's more of those romantic conversations between Sang-pil and Jae-i, where they emphasize their renewed commitment to each other through the mutual goal of the investigation.

Not that either Sang-pil or Jae-i are terribly proactive when it comes to actually doing anything in regards to the investigation. It's somewhat grating how the main two breakthroughs we see here do not come from the actions of Sang-pil and Jae-i, but rather Hyeon-joo and Oh-joo. They just pop up and hand over major breakthroughs to the lawless law firm for their own generally inscrutably motives.

Not that they're really all that inscrutable. Jae-i really should be a lot more suspicious of Hyeon-joo, because what kind of woman would risk her own life and that of her family just to go after Moon-sook? Observe that Moon-sook herself remains very guarded. Moon-sook's quiet psychosis is as always a nice contrast to Hyeon-joo, who simply acts aggressively and loudly and assumes that's enough to cull any hint of disloyalty from the hired help.

Oh-joo's character journey is also worthwhile. Mostly all he does here is just take time off to carefully think about why it is that Moon-sook got mad at him. it's starting to dawn on Oh-joo that Moon-sook does not actually consider him a partner in crime, but rather a low-class thug who happens to be useful sometimes. This makes for a nice contrast with the Sang-pil / Jae-i relationship. They have the same comparison point of aspirational ex-gangster versus legitimate legal professional, yet Sang-pil and Jae-i have healthy mutual respect.

I'd like to see more obvious comparisons between Jae-i and Moon-sook in general. That seems like unexplored potential, especially considering that the giant setpiece here involves Sang-pil and Oh-joo making an awkward team-up entirely because Sang-pil shows Oh-joo proper deference and politeness. That's sort of an odd way to describe "repeatedly tries to jump up and punch Oh-joo in the face" but you have to understand that for a gangster like Oh-joo, a guy who wants to shoot and just shoots instead of talking is the one who really deserves respect.