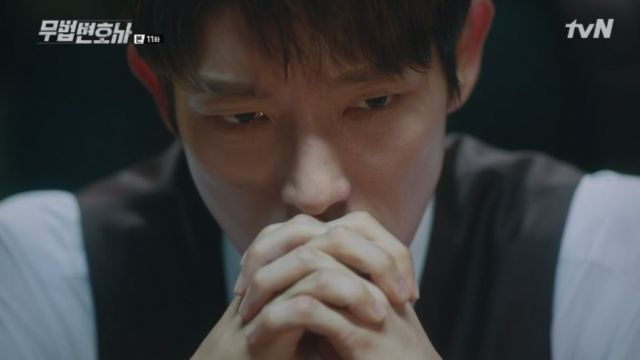 So Oh-joo's motivation for helping out Sang-pil is both a lot more complicated and a lot more simplistic than I was expecting. Like Moon-sook, Oh-joo is dismissing Sang-pil's potential as a threat. Which makes sense considering how easy it was to frame Sang-pil for murder. Why bother worrying about Sang-pil at all when Oh-joo has his own domestic problems to worry about? Not to mention, political problems in that people still tend to think of Oh-joo as being a thug?

Even Moon-sook is only a peripheral factor to Oh-joo's motivation, which puts them on a collision course in regards to passive-aggressive showboating. Really, the entire interpersonal dynamic between Oh-joo and Moon-sook has taken a turn for the delightfully weird. Up until now the assumption presented was that Oh-joo and Moon-sook were jockeying for power and money. In reality, they just want to be well-liked in spite of doing obviously evil things. The entire conceit is wholly ridiculous, yet oddly plausible.

The political commentary is also spot on. Oh-joo achieves popularity by turning on one of his underlings, implying that he is very much against corruption. Then in a later scene, we see him openly trying to poach talent from Moon-sook by promising that he always looks after his subordinates. There's also a definite satirical bend around Moon-sook, who is lauded for her qualifications...administering the ludicrously corrupt judicial system she is now promising to reform. The irony is palpable.

Less impressive is the story as it involves Sang-pil and Jae-i. The main thing they do is finally start spreading that photo around, mostly because the timing is proper. Elsewhere they're still relying almost entirely on Hyeon-joo for intelligence. It's only at the end of the episode that Sang-pil finally gets around to noticing that Hyeon-joo is not necessarily the most trustworthy source, even though Jae-i rather inexplicably treats her as such.

I can't help but feel like Hyeon-joo would inspire a lot more confidence if she had more of a cloak-and-dagger approach. Hyeon-joo is trying to keep her identity a secret from family. Hyeon-joo is also at risk of being murdered if Moon-sook ever catches wind of what's going on. So why does she just walk straight into the law firm without even bothering to cover her face? Jae-i similarly shows frustratingly little initiative. The scene where Sang-pil literally has to teach Jae-i to defend herself was just a tad embarrassing to watch.